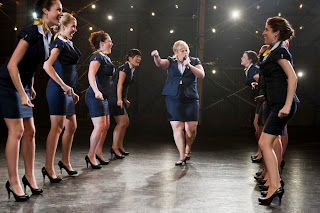 We are 12 days into the year and we have yet to see one movie.

Of course, we'll have to get cracking to see some of those other now Oscar nominees.  I mean, I'm sure Mike will be challenging me to that 'who will win' contest.  I have to say, it seems like a more difficult race this year than last - but hell, that was a guessing game, and one neither of us did well with.

When I travel, I almost always avoid the movie on the plane, that is, unless I'm in first class and have direct TV.  But when I was back in steerage lately, they showed Pitch Perfect, which I had heard about and it had decent word of mouth.

It wasn't bad, but whomever did PR to get the good word of mouth earned their paycheck.  Basically, the movie is Bring it On meets Glee.  While not horrid, it is horridly predictable.

A bunch of underdogs get together to sing a capella and overcome the stick-up-her-ass leader to do something wild and go all the way to Nationals !!!!!

Sound familiar?   It should.

That said, there are a few worthy moments, mostly Rebel Wilson (who you all saw in Bridesmaids) and Anna Kendrick (who you might have seen in Up in the Air).   And Elizabeth Banks, who is usually better than the things she appears in, gets extra points as a commentator who used to be in a college a capella group called 'the Minstrel Cycles'.

There area one or two musical numbers that impressed (Dr. Dre's "No Diggity", which is included near the end of the video clip I embedded) and it was decent that Kendrick could actually sing, but many of the songs were just bad - though let's face it, they were meant to be, as the main group were the underdogs.

Yeah, it was an ok way to kill 90 minute in-flight - even if it was sanitized for the friendly skies.  ...and while it only came out in October, I think it's already on DVD - or at least in your wide bodied jets.

Thought it was a little bit better than 'just fair', mainly because of the musical numbers which were well choreographed and sung (ah, but sung by who?) - but then I've never seen any 'Glee' on either film or TV, so in that respect, at least, I'm not one to judge. But, to be honest, I didn't come out of the cinema wishing I hadn't spent the money.

I still wanna see it. Imma need new "hep" lines to bust out for the cool kids this summer.

I enjoyed it. What I did not enjoy today was Amour. I HATE French movies, why do I do this to myself. The film ends with the audience having no idea how it ends. Like every other freaking French film. Gah.

Skipped it. Give me my 1980s teenage angst movies any day.