Runs in the Family

Over the weekend, 710 and I had a grand dinner with two of my other cousins.

I've been doing a lot of cousin time - on my father's side. ...and truly enjoying it.

Billy and Robyn were in town last weekend had dinner with 710 and some tall, drunk, Asian-looking man. 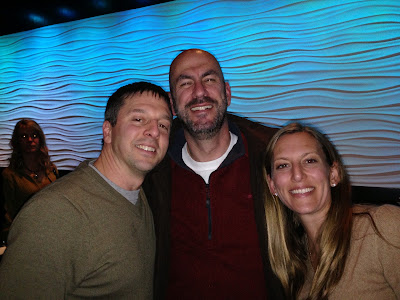 Seriously, what is up with how I look when I smile in pictures.  Awful!

I had to miss a dinner with them earlier in the week that included David.  That may have been a bit too much family at one table. Restaurant staff everywhere would rebel.....and rightfully so.

For me, it's a shame they're not all in town, but maybe that'd be asking too much. They've probably had their fill of each other, but I've been cousin deprived.

In October, I ran into Lisa and her husband at the airport.  Lisa took this pic to send to David - who immediately dubbed us 'crackers'. His two favourite crackers. 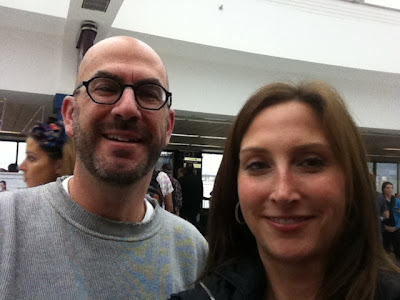 I'm not sure we're that white.  But it's safe to say we have little to no street crud cred.  And it was fun to hang with someone in the airport while our flights were delayed for hours.

If you go through a year or two of posts, you'll have seen me with five of the six cousins.  Laura, if you're reading this - we will need that photo at some point to complete my collection.  Or your brother could just photoshop one.

It's been a good few years of extended family - and I'm hoping to continue that streak.

Song by: the Roches
Posted by Blobby at 2:05 AM

Ok, so I click your blog and see the first pic and think to myself, Blobby has got to love that pic. Finally a great pic not even he can complain about. But sadly no...

No matter what people say about you, and that includes all the stuff on the bathroom walls, you got a cute smile.

At least you didn't have your rounded glasses on in the first picture. You would have been totally Asian-inspired. ;-)