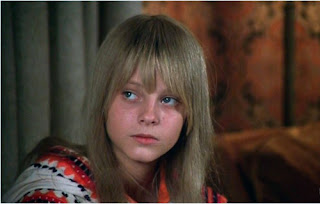 So Jodie Foster is gay.  BFD.

As one of Scott Thompson's characters would say on Kids in the Hall - "well she's the last to know!".

Did you see her in The Little Girl Who Lived Down the Lane back in 1976?  Even Helen Keller could have told you then she was lesbionic.  (that said, it is a pretty good movie!)

It is 2013. I don't care that she bothered to come out - let alone on national television.  Yes, she should have done it eons ago, but you can't change the past. She made it seem all too easy to come out when she should have been leading the way for those decades younger than herself.

I'd say I was more shocked that she alluded to retiring from acting, but then I remember she's made the same move three times (Panic Room, Flight Plan, the Brave One), so I wasn't so broken-hearted. So she plays an vigilante mother time and time again - and not all that well.  Snore.

I'm probably one of the few who thought she actually took a risk and didn't suck at Anna and the King.

So if Foster has sins to atone for, it should be for continuing to befriend Mel Gibson.  He's misogynistic, anti-Semitic, and has documented homophobic remarks.  While I don't think Jodie is Jewish, she seemingly gives Mel a free pass on the other two.

Two communities she belongs to - women and gays - and she buddies up to that douche.  While she might be condemned by some for not coming out, that won't be by me. But it's hard to let her off the hook for cavorting with an enemy.

Song by: the Lovemakers
Posted by Blobby at 2:08 AM

I'm glad you picked up on the Mel Gibson thing. It was shocking when she mentioned him in the speech.

To be fair coming out can be career suicide on Hollywood. Most roles require a hetero love interest and when the actor is gay the audience doesn’t buy the plot. There is not a lot of room for known gay actors in Hollywood. Not to mention a loss of sponsor and media support that would have happened back in the day for known gay actors. And not to be harsh but she actually knows Mel Gibson – we do not. Who are we to judge who person is friends with. Maybe she knows something we don’t?

For Anonymous - i get that it can be career suicide, but Foster has rarely gravitated towards the roles romantic partner.

As for Gibson, I assume she knows him on another level - and if she still chooses to be friends with a vile man (and read his quotes), she can - but you're known by the company you keep, so she doesn't have to have my respect in that regard.

“What is everybody talking about? Didn’t I just hear Jodie Foster fake a coming out speech? I’ve never heard the word PRIVACY said so loudly. . . . The Hollywood hypocrisy is complete: Jodie Foster accepts her Lifetime Achievement award at The GG’s and then demands PUBLIC PRIVACY. . . . Jodie Foster was drunk. . . . Jodie Foster says “I want all of the good stuff and none of the bad stuff!” What is she? A three year-old lesbian?” —Bret Easton Ellis via Twitter