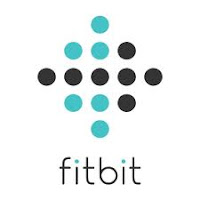 It was definitely a holiday gift.

In the never-ending quest for fitness and health in our house, 710 got me a fitbit and the accompanying scale.

Yes, you read that right - he got me a scale!   Albeit and electronic one with wifi, but a scale nonetheless.

I could harrumph about that, but you know - technology is involved and dare I say, give me a pedometer that that syncs to an iPhone app and a website to track my steps, my activity, calories burned, my food intake (I mean, if I bothered to enter that) and yes, my heftiness weight, and I'm golden.

It is a neat idea and I do seem to be more aware of my activity when I do wear such a device, even the kind that doesn't auto-sync to any electronics.  You can't change what you don't measure.

Yes, when I do step on the scale, it recognizes me, and distinguishes between 710 and myself, and sends my weight and body fat percentage to my fitbit site.  Both of those can be daunting, for sure. Hopefully it's meant to be more motivating than daunting. 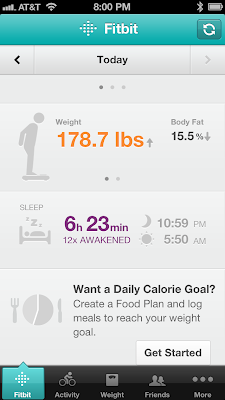 As it is, I have been overestimating my weight, apparently.  I thought I was at the 185# mark, but I am actually under 180 - which is unheard of.  My body fat is 15.5%, which is on the mid-scale of 'fitness''.  You can see where it tracks if your weight or body fat has gone up or down since your last time on the scale.

One of the neat things is, if you wear the pedometer to bed, it tracks your sleep patterns.  It can tell exactly when I went to sleep.  Somehow it calculates how many times I awake during the night. 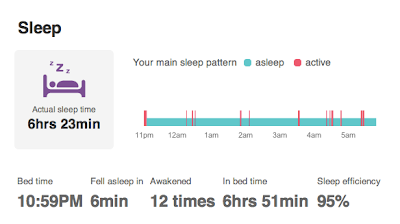 Even I will say that waking 12 times during the night is a lot for me.  Since wearing the thing, I think I average usually closer to waking six time per night, but two nights ago was a restless one - clearly.

You might wonder where one clips the device onto when sleeping.  It's a no brainer if you wear pajamas - but I don't.  So before you start getting naughty, they provide an armband.  You are to wear that on your non-dominate arm.  I can only assume that if you pound the pud with that hand, you get activity that isn't easy to calculate and skews your data.

Naturally,  it does some of the basics - steps taken (when I work from home, I never make the 10,000), but I usually hit my marks with flights of stairs and calories burned.  I suppose that is why I'm 179 pounds and not 185. 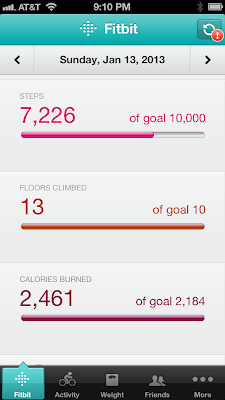 While I don't mean to be obsessive about wearing it, it is safe to say, I have rarely been without it since breaking it out of the box.  I suppose I don't have to wear it every night to bed, but I have.  I also suppose I have to do something with the data instead of just collect it - that is if I want to sleep longer, hit 10,000 steps or lower my body fat.

It's only been two weeks.  I need time.

Another blogger I follow, J.P. of Life is Such a Sweet Insanity recently received one of those as well. Now you've both piqued my curiosity about it. Hmm....

And congratulations on the weight loss!

I love gadgets! Your Body Fat is great! On the charts I looked at your lean and on the border of Athlete, considering what you've been able to do the last few months it's a great number.

Wow, that looks like a cool thing. Will check it out. Especially interested in the sleep thingie. Because I have issues there.

I enjoy your app posts; this is one I want to try, it looks fascinating.

The second I find out that it's something connected to technology I'm all for it. Don't get me wrong, I usually don't have a hard time getting myself to work out, but well, I'm fascinated by dongles!