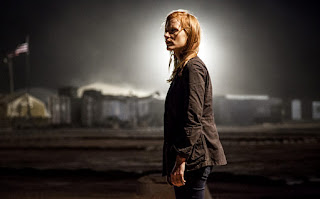 Third week of January and we finally got out first 2013 movie under our belt - and it was a good one:  Zero Dark Thirty.

Admittedly, when I started hearing about the movie back in early Fall, I wasn't all that chomping at the bit to see it, but it was getting decent buzz even though it was about a subject to which we all knew the ending.  But the same with Lincoln and people are eating that shit up.

ZDT (as I will refer to it going forward) ended up on our short list and we debated for a few seconds about this or Lincoln.  We'll do Abe the Babe, next.  I figure we need to get in some Oscar nominated shit before the awards, but mainly before Mr. Short Attention Span Theater puts up his challenge.  I need to have some frame of reference, right?

I have no intention of tying again this year.

Anyhoo, ZDT was a great film.  I will admit, it started a little slow, but when things go going, it truly hit its stride and didn't let up.  And while if you read the papers back in May 2011, you know how it ends, there is still enough intrigue and suspense to remain engaged for nearly three hours.  ...and it doesn't end up feeling like that long.

Yeah, there were some detainee / torture scenes, but not as extensive as I thought might be there - and they were short-lived.  And there was some stunning violence in scenes, but not gratuitous, over the top or out of place.

I think I can honestly say I've never seen Jessica Chastain in anything.  I never saw Tree of Life or the Help.  But she was good in this. Like the movie, she started off 'eh', but there were a few scenes where I can see why she was nominated and might win the Academy Award.

A few folks I wasn't really expecting, including Tony Soprano as Leon Panetta or that goof, Andy, from Parks & Recreation. I found them to be good, but more of a distraction for what little both were in the film.

I had a few issues with some time lines, but shit no one else would most likely pick up on and I found it a little annoying that the only two women in the film were in competition with each other - at least for a while.  Because if we've learned nothing from movies:  women just can't get along with each other!  I found that behaviour to be trite.

While Chastain might win best actress, it is doubtful that ZDT will win best picture. For some reason, the director, Kathryn Bigelow, was not nominated for best director and rarely has a film won best picture without the director at least being nominated, let alone winning.

When it comes to Mike's contest, I'll have to think long and hard (hehehe, I said 'long and hard") about who I will choose for best picture.

Song by:  Sam Phillips
Posted by Blobby at 1:46 AM

We saw Django Unchained. Loved it. All I know is this film looked like a war or military film. I don't usually feel like seeing them even though Hurt Locker was great. Maybe we will see this one.

This is the most glowing praise I've heard from you since...since...well...