Beginning 2011, I thought I'd focus on debut disks - just to make it more challenging for me. I don't think you'll care one way or the other. 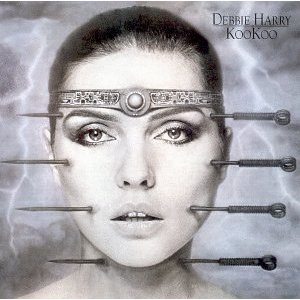 Technically this is a debut.  Debbie Harry had clearly been recording for half a decade with Blondie, but this was her first solo album, KooKoo.

Released in 1981 (between Blondie's releases of Autoamerican and the Hunter), I have always asserted that KooKoo was ahead of its time.  In many aspects, 32 years later, it still is.

Produced (and some stuff co-written) by Chic's Nile Rodgers and Bernard Edwards, it surpassed the shlock they were doing with the likes of Diana Ross, but would give glimpses to what would become the toned down sound they'd give David Bowie, Duran Duran, the Power Station and yes, Madonna.

IF, the album had been a three song EP that included "Jump Jump", "The Jam Was Moving" and "Backfired" it still would have been killer disk.  But it also included some good stuff like "Chrome" and "Now I Know You Know".

Like many Blondie disks, it doesn't fit easily into one category.  But it was a little more out there than Blondie fans were ready for and it didn't really fly or sell.  Oh sure, I bought a copy and my friend Jon bought a copy - but as far as I know, we're the only two people who own it.  Well, I bought two - one on vinyl then eventually on CD.

I will be honest, I was hoping she would put her cover she did on SNL of Teddy Pendergast's "Love TKO", but it wasn't meant to be.

Still, the songs Harry wrote, the sound Rodgers and Edward created were like nothing before and very little since.  It is definitely worth a listen.

Oh - and the cover art?  Geiger was big in the late '70s early '80s (well, in some circles), but I remember  the UK banning the advertising of the album because of he graphic nature of the artwork.  Can you imagine?
Posted by Blobby at 2:08 AM

That cover is a classic. Have it on a wall in our office.

I remember this cover perfectly well. I love Debbie Harry.

Oh please. Bitch has had work done. She's been pulled so tight her muff has become side burns!