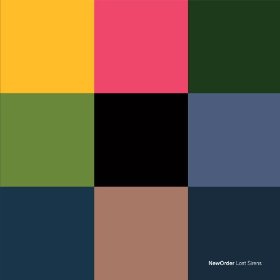 Technically Lost Sirens is a new album by New Order.  Actually, the songs are old(er).

All eight songs were recorded during 2005's Waiting for the Siren's Call (one of their overall best disks)  sessions. While not included on that eight year old disk, the intent was to include these songs on the follow-up, which never happened.

In the last half decade (plus), Peter Hook allegedly left the band in 2007 and Bernard Sumner said he no longer wanted to work with / as New Order.  In 2011, some of the original members reunited along with a new member or two.

I'd say Lost Sirens was released quietly, but it is the U.S. and unless you spend your time in dance clubs (I do not), where else would you know that New Order had "new" music?

...and it is New Order, so while I enjoy their sound, it is not radically different album to album - and Lost Sirens is no exception.  Overall.

Starting off with "I'll Stay With You", it is classic / typical Order. Not a bad thing. The light guitar and the underlying synth, the similar drum beat and the all too familiar Sumner vocals. It is like visiting a good friend. Comforting and no surprises. As previously stated, this is not a bad thing.

Ditto with "Surgarcane"  "I've Got a Feeling" is good enough, but nothing you're going to remember forever.  ....and let's face it, I remember a lot of their music.

The two most interesting songs are "Hellbent" and and the very moody "I Told You So".
"Hellbent" has way more guitar on it than most songs they've ever recorded.  This is a good thing.  "I Told You So" has an early New Order or even Joy Division feel to it.  It is a good album closer.

Like any album, there are a few clunkers - but when you only have eight songs on a disk, you shouldn't have more than one.  They do.

"Shake it Up" starts sooooo badly. You almost have to get to the two minute mark before it hits its stride. But I like it after that. Still two minutes is a long time to wait.

"California Grass" kind of bores me.  To take a line from the song itself "I can't describe", but it just kind of sits there. There is a late '60s vocal vibe that runs through it, maybe to emulate music coming from that state back at that time.  Or maybe I'm must thinking too much about it.

As it stands, Lost Sirens isn't bad, but it is not standing up there with their stellar work. You can see why they opted not to include some of these songs on the original release, but some of them could have easily fit into that playlist.

Yet, I bought it, because I think I've purchased every new release New Order has put out. And even if some of the songs aren't stellar, they are better than most things that hit the airwaves, so why not give it a chance.

I suppose that is the good thing about iTunes and amazon - you can purchase individual tracks, but I'm still a full album guy.  But hey, it was only $7.82.  Cheap!
Posted by Blobby at 1:23 AM