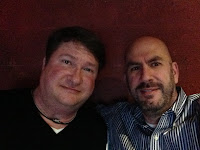 Last night I had dinner with a friend I don't think I had seen since 1991.

Jack and I met the summer of 1984. I was working in Manhattan and, let's just say, we met in a less than work-like setting.  Later that day, I was surprisingly introduced to his partner (who must have been surprised himself), who became one of my bestest friends in the universe, David G.

As off-putting as my introduction to David  seemed must have been for him, ironically he and I were the ones who became and remain quite close while Jack and I clearly drifted apart. I think I've only even spoken to Jack once in the last decade, though I still get the occasional email from him.

Oddly enough, in 1990, Morty was in P-town having some annoyingly loud party at his rental when the next door neighbor had to come over at 02:00 to tell them to keep it down.  That neighbor?  Jack.  Morty called me at 02:10 to tell me who he had met.  I'm not quite sure how they put 2+2 together to get me into the equation, but they did.  Small world.

Even more odd was that 710 and I were going two weeks later to stay with Jack and David.  That is a story unto itself - that 23 years later, parts I don't even want to revisit. So you shan't be getting that tale from me.

Jack and David moved on from each other - and Jack and myself moved on as well.  David and me? Not so much.

So while having a free evening in Central California, I opted to take the plunge and call Jack.

I opened with, "Hey you big homo!".  He went on for ten minutes (!!!!) and I let him until he called me "John".  He had no fucking idea who was talking to him.  I guess I can't blame him when we have not really conversed in years.

Still we decided to get together for appetizers and a drink last night.  I'd say it was nice to catch up - and it was - but it's hard to cram 22 years into two hours.  ...and I was told long ago you know you're old when people only talk about their maladies.

I'm not saying I'm old (but I am), but I'm not sure at that point what else we had in common, so it was easy to commiserate. ...and that's what we did.

Two hours was about enough time.  He knows I'll be traveling back through the area and wants to get back together. It was a fun experiment, but I don't know if I can relive too many nights talking like we did.

I'm back in two weeks, but I don't know he'll know that.

You look horribly uncomfortable in that pic.

Your second paragraph made me mentally laugh. Thanks for that.