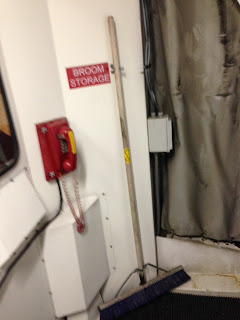 It started with me sleeping through not only my reminder call from United, but also the alarm that I had set via the iPhone.

I awoke at 03:30, just in time to throw on clothes, brush my teeth (no shower) and finish what little packing I had to do.  The airport shuttle was waiting for me when I hit the lobby.

The first flight went off pretty much without a hitch, though I didn't get upgraded (as predicted).  I'm having roughly the same success percentage with upgrades that I had in 2013.  Oh well.

First off, there was no plane at the gate.   ...and we were only 20 minutes from take off....forget the boarding of the peeps.

Allegedly they got a 737 but the jetway didn't work and they didn't have another place where that type of jet could pull up to.  And yes, I realize I just ended that last sentence with a preposition.

In between, we moved gates four times.  The last time the plane and jetway matched.  First class was boarded (that's me) and then no one else came on the plane.  That's when I realized the plane had no power.

My lord. Not a Friday the 13th and not a full moon.

I thought the flight would be cancelled due to bad weather in Cleveland  - the 12-24"of snow that never came - but no, it was just mechanical failure that slowed us for three additional hours.

....and I had to watch Pitch Perfect again.

I need this week to be over.  I needs to stop traveling so much too.


Song by: Joni Mitchell
Posted by Blobby at 1:09 AM

Did they have a bathroom at the airport that you could finally take a shower in?

Prespositions are words you should not end sentences with.