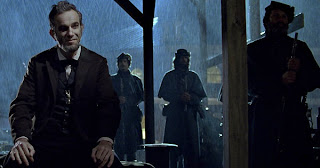 Well, we might have just seen our last Oscar nominated anything - for the 2012 season, that is.

Last night we finally saw Lincoln.  I've been wanting to for months, but we just got around to it.  Shoot me.

Let's just start out saying that Daniel Day-Lewis just fucking nails it. The man is unparalleled in his performances and this one is no different. As he is the title character, he is in almost every scene (but not all) and carries most, if not all, of them.

There are no spoiler alerts here folks - it's history. The story focuses on basically four weeks of his presidency, but extends it to almost four months so, you know, they can kill off the main character - though like many Spielberg movies, he doesn't know when to end it and had a good transition out 10 minutes before the actual ending.

The movie focuses on attempt to pass, and finally successful passage, of the 13th Amendment.

I'm not the biggest Spielberg fan, but he did it without too much of his trademarked shlock.  And he does like his battle scenes - and the only thing I'll say about that is that in the 1860s, you forget that war was more hand-to-hand combat than what we think war to be. The face-to-face brutality of what the War Between Brothers was is shown in harsh reality, even if only for 90 seconds.

The flick is about two and one-half hours, but it moves along well.  Tony Kushner, whom did such an awesome job with Angels in America, adapted the screenplay here. However, he makes parts of film a little wordy and now and again it becomes a little heavy-handed and gets in the way of itself.

The supporting cast is pretty frickin' good.  Tommy Lee Jones shines, and I'm not much of a fan of his at all.  Hal Holbrook is well.....every character he's ever played.  And then there were the number of other unexpected actors - like D-Day from Animal House (really!),  the bad kid from the Bad News Bears and James fucking Spader - who plays every character the same way since after Pretty in Pink. He makes me uncomfortable....and I just don't think he's that good (and him saying the word 'fucked' was completely out of context for the rest of the movie).

Oh, and in the credits as some angry lady was played by Ambassador Jean Kennedy Smith.  Yes, John and Robert Kennedy's sister.

Oh - and Sally Field. Can't forget her.  I've always been a fan of hers - even as Sister Betrille. She was off the charts good. She really was. It's pretty hard to play solidly against Day-Lewis, and Field not only holds her own but matches him scene for scene.

I enjoyed the movie - and even though I waited, it was worth the wait.  It will help me solidify my contest picks against Mike.  ...so there's that.

Didn't Hal Holbrook play Lincoln back in the 70s? Do you remember that? Nice bit of casting...

DDL's portrayal was astonishing beyond belief. No doubt in my mind that he's the greatest screen actor of ALL at this time - and in a way it's good that his appearances are so few and far between, not allowing us so to overdose on his creations.

I absolutely loved Spader in Lincoln, and you evidently have seen very few of his films because he certainly doesn't play them all like Steff from PiP. Plus the "f" word was part of Tony Kushner's dialogue...it wasn't him just doing it.