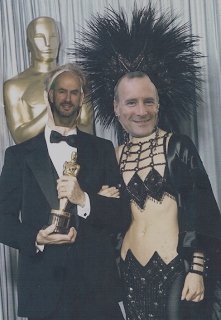 I'm foregoing the My Music Monday post for one important reason:  I don't want Mike to think I'm holding off on broadcasting my thoughts on our his 2nd Annual Academy Award contest.

Mike put almost no a lot of effort into this contest and his selections. Clearly, he went out to see almost none of the movies, but yet he fancies (yes that's right, 'fancies') himself king of this award-thingy.

It's not really about that wagered drink. It's about bragging rights (not that everyone else won't roll their eyes at us). It's about smugness and self-satisfaction of knowing your a winner - and possibly rubbing it in their face.   Perhaps that is just me talking.

I could be here to pay my respects to the winner, or to gloat.   Before we declare a winner, let's recap, shall we?  My choices are listed here.   Mike's are listed there.


So against almost all odds, Mike and I tie again....two years in a row.  Who'd a thunk?

It might be a hard realization for both of us that we are not so different after all.  That might be a more frightening prospect for those around us - which really only includes Peter and 710.

I'm happy to go dutch on drinks and dinner this July when we are back in Boston, if Mike is man enough to dust himself off and admit non-defeat and non-victory. In theory, we're both grown men.

....and lest you think I wasn't prepared for the alternative outcome, I'm nothing if not mensch.  I made an image in case I lost completely as well.  I didn't lose, but.........aren't we all winners.  I mean, really? 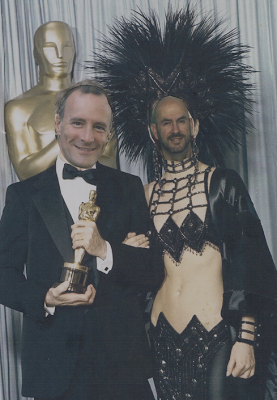 Mike is a worthy opponent and I am a winner just to have him as a friend.  How's that for taking the high road?

Song by:  Phil Collins
Posted by Blobby at 3:52 AM

I think you look better on cher!

"It might be a hard realization for both of us that we are not so different after all. That might be a more frightening prospect for those around us - which really only includes Peter and 710."

Where did you find directions to the "high road"? Isn't this your first visit?

Well, I didn't see you anywhere in the vicinity!

You both picked that piece of crap Argo??