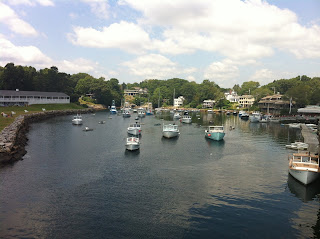 It's probably too early to discuss, but what the hey.  Or is it 'hay'?   I guess it's one of those words they can play on the new KableTown show Homonym.

This year's birthday is a milestone one - like a few of my blogger friends here, who won't go named.

Three years ago when we were going when were vacationing in the Outer Banks I decided I wanted my peeps to join us in a beach house to share for a week.  I'm not big on parties, let alone surprise ones.

I figured, by doing the inviting, I controlled the situation. Yeah - I'm that guy.

But in the two years that followed that idea, 710 and I moved from OBX up to Maine for our summer vacations - and that sounded more appealing to us, as we fell in love with the beach side town.  But there was a slight potential problem - or three.

What the location did have was that none of my friends had been to Maine and were interested in going. So that works.

We have the week secured and right now we have 6/7ths of the crew committed.  I'm feeling confident that we'll get the entire folks to attend for at least part of the week.

710 and I had a good trip up there with iffy weather and a great trip up there with great weather.  So even if it is questionable conditions, this is a group who will still enjoy the time together.   ....and there is nothing saying we all have to spend every waking minute together - we're all adults.

Of course, going to Maine (again) means we'll be spending time in Boston as well, on either side of the trip. That means, I can cash in the drink that Mike will owe me after Sunday's Oscar ceremony.

Now it's months away - which sucks.  I've mentioned before that 710 and I are horrid at planning our vacations.  Normally we'd do this about a month before our departure date.  Since we have actually made these arrangements weeks ago, now we just sit and wait.

I don't have the patience for that.  I'd say I wanna go 'now', but it's probably too cold for that.

Song by:  Dolly Parton, Linda Ronstadt, Emmylou Harris
Posted by Blobby at 12:36 AM

ay-yup, it's still too cold up there.

I suppose we won't see you at the spo-a-rama-lama-ding-dong in DE next month? quelle dommage! :(

There is never to early to plan for things. The earlier you plan, the better would be the outcome.

Wasn't there a movie that started out like this?