Slave to the Beauty 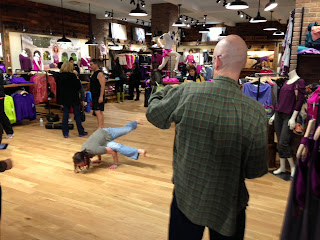 Elaine Benes would have referred to him as "mimbo".

While it was easy to think that of our yoga instructor last Saturday, and in a way I would have preferred it, his day job was one of a chemical engineer.

Brains and brawn.  Some guys have it all.

Usually we don't get too many male instructors.  ...and then here he was, a little low key and very friendly. But we're a good group and easy to get along with.  He also wasn't hard on the eyes.

I will say this - the man liked his chair pose....a lot.  Though lately, it seems all instructors like it a lot.  My quads have been burning quite a bit the last few weeks.  Reid (yes, his name was 'Reid'...or "Reed") also liked the high to low plank and back again - or basically what became push-ups. Blobby didn't like those.

You can see that Reid/Reed has long hair, as a mimbo might, which would one to think he was a little granola-y, which he might be. There was too much Dave Mathews Band and Maroon 5 (well any M5 is too much if you ask me) played during our practice.

I make more out of getting adjusted in my practice than it actually bugs me. I don't have a fear of people touching me. I know the instructors are trying to get me into a better place, but I just feel like I'm failing - though that's not their intent.

While going into half-pigeon, I turned to David and somewhat joked, "of all the times I don't get adjusted, it has to be today?"

David's reply, as always, had me laughing  - too much so in a class of 15 - when he said, "raise your hand for help and maybe he'll lick your balls.".   Thank g-d, no one asked at what I was chuckling, as no doubt it would have been repeated.

Reid / Reed started out before class doing a side Crow, which is so not happening for me.  He wasn't thinking we would be doing it in this class, but of course, two "show-offs" were able to. 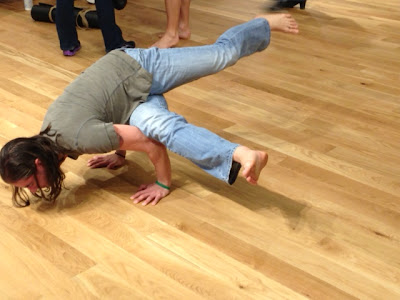 As you might remember, my 2013 goal / resolution is just to do regular Crow, but I'm not there. Side Crow would be a bonus.

My hand, is still incredibly painful, so balancing 178 pounds on it is not really doable at this point, though my cousin will tell you it's less about strength, which may be, but it's still a lot of hand / wrist action, as you can see. The pain would be torture.

...and speaking of torture, David, invited Reid / Reed to tea with us after yoga, and he accepted. But before that, David wanted to take a picture of me taking a picture of Reid / Reed doing a side Crow. He was almost too willing to oblige. Other than texting the title image to me, I have no idea what David plans on doing with his pic. It's sometimes best not to ask or know.

Reid / Reed wants to do an entire classes using only the music of Michael Jackson, Maroon 5 and the Dave Mathews Band for each individual class.

He might be pretty, but he ain't that pretty. 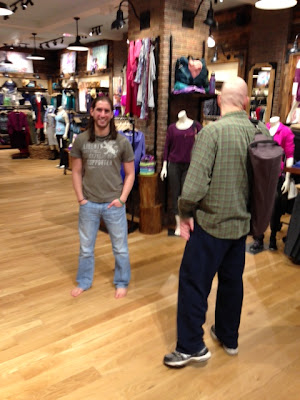 Song by:  Mary Chapin Carpenter
Posted by Blobby at 12:50 AM

So that's what happened to Jesus Jones.

VERY easy on the eyes, and a good height for me. I will hug him and squeeze him and call him george.

I've heard of a himbo, but not mimeo. I'm guessing it's the same thing?

Sadly, none of us could achieve our goal in Plow Pose.

I envy you - I keep meaning to redo yoga but i never do:-(