Down the Old Plank Road 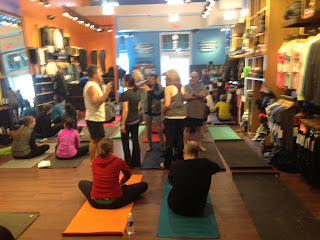 Sunday I took my first step back into yoga in 22 days.

My last class was the Saturday I fell and busted my hand.

The pain in my left hand is still measurable, and I'd give it a '6' at any given time of day.  The few times I've taken medication for it, the pain seemed to dissipate.  Not so much this last Sunday.

As similar as my cousin and I are in many regards, it is sometimes downright eerie.  He popped a tendon in one of his hands the day I busted mine.  I'm not sure he's been to yoga since that time either.

The similarity of the cousins was brought up by someone in yoga class, I'm guessing with a vague sense of skepticism. But everyone was very nice after class, asking how I did.  It really is a great group of folks I work out with.

Poor Judi did not want to be part of the conversation I was having with her husband.  Suffice to say, she now knows I am left-handed in the art of self-love.

Class was tough on its own - in a good way, but no doubt tougher for me.  I had gone in knowing I would be limited and figured if nothing else, I could do some standing poses even if it didn't go along with the flow the rest of the class was doing.

Downward Facing Dog was not an issue for the most part.  Going from high plank to low was a killer. Almost tear-inducing.  After a while Chaturanga became just as painful, as did floating to the top of your mat. When one pushes off to 'float' you are usually in down dog and use your arms to assist. It was fine for the first half of class, but I found myself cringing before doing it during the second half.

A right side plank was a non-starter.  There was no way to balance using only my left hand. Could not be done.

Mind you - I was foolish enough to keep doing most of it because I'm nothing if not a lemming.

Like all my injuries, I feel the need to 'power through them', which is totally illogical, but one I'm not entirely willing to forego.

As is stands, and if I can do it, I have four yoga classes in a row starting on Thursday.  That's going to be a lot of ibuprofen!

Does a hot dog make you loose your mind?

Yoga's really quite tough. But at the end of the day, it's all worth it.

"The Art of Self-Love". You definitely didn't grow up Catholic. ;-)