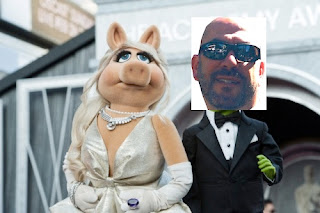 While he might have been on the Bachelor, make no mistake, he is not the bachelor. His rose has long since wilted faded and no doubt been given away.........many....many times.

Yes, I have been re-challenged to participate in Mr. Short Attention Span Theater's (so short, he's only blogged three times in four months!) "annual" Oscar contest.  He claims to win his office contest yearly - he just fails to mention he probably works from home in an office of two. And he only triumphs because Otis doesn't have opposable thumbs.

Last year it was a tie, but this year the playing field is level. Mike didn't set out rules last year so it was a mish-mash of who voted for what, but when it all came down to it, it was basically a tie.  But since he's considerably older, thus having less chances as the sands pass through the hourglass, the appellate judges probably would have ruled in his favour.

This year, we'll be voting guessing on all 24 categories.  Mike, being Mike, will dominate the make-up and hairstyling and costume categories. I will, no doubt, be more successful in the lumberjack and truck pull selections.

At first, I thought the wager of buying the winner a drink was harmless enough, but then I remembered watching Mike toss back his pricey top shelf double martinis (with extra olives!) faster than Larry Tate after thinking he saw Endora appear and disappear right before his very eyes.

This bet might force me to take out a loan just to pay up, so I had better win.  It's no longer just about pride.

All are certainly welcome to participate, but I think you know the Prize Patrol will only visit either Mike or myself.  But don't let that deter you.- bragging rights are just as important as getting inebriated on someone else's dime.

Like Mike, I have yet to settle on my selections. This year seems more difficult than last. Oh, the pressure. Still Mike was nice enough (I know, right?) to list out the categories for me, so we really are playing off the same field.

We still have one or two movies left to see before I can really make my selections, but time is tight, as the awards are in about two more weeks. The reality is, I'll only get one more movie in and it will be Lincoln, so.....I'm not sure that will change my votes. But it's about strategy, not what I really like or who I think should win.

Unlike the Emmy contest, there will be no Will Win / Should Win scenarios (Mike's rules!).  It is only picking the winners.  Like me. I'm a winner.

Oh my how you do go on (and on). This entire post reeks of fear, despair, petty jealousy, and cheap, cheap vodka. (What have I told you about blogging while on a bender. Have you learned nothing from "Lost Weekend"?). Catty "Bewitched" references aside, I DO expect to sweep this year's contest, due in part to my newfound kinetic connection to Hollywood (see "Meeting Betty White" and "Appearing on The Bachelor"). I wish you the best of luck and enjoy "Lincoln" - you know it's going home empty-handed on Oscar night, don't you? Sucker...

Pretty interesting list. Though, I have to admit I haven't seen all these films.

Of all the movies listed, I've only seen two. Both of which I regret.