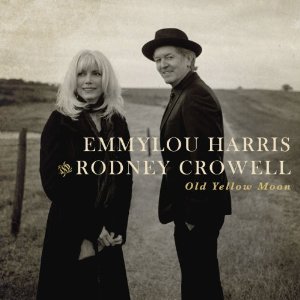 For those who are unaware, Rodney Crowell used to be part of Emmylou Harris' Hot Band, way back in the mid-'70s.  Crowell went onto his own success as a songwriter and artist (and Rosanne Cash's first husband).

Fast forward 30-odd years later and Harris and Crowell have finally put out an album together, Old Yellow Moon.  While it had been in the works for a while, it was finally released just two days ago.

Maybe it's not enough time to review it, but what the heck - it's not like anyone who reads my blog is going to buy it, other than possibly my friend Jon.

For all of Crowell's songwriting skills, only four of the dozen songs are his - the rest are covers from other artists, which is actually Harris' strength.

I really like both artists, so why am I not fully digging Old Yellow Moon?

There are some tunes are old country like, that both performed back in the day - and they can be good ("Chase the Feeling", "Invitation to the Blues", "Bluebird Wine", "Bull Rider" and "Open Season on My Heart"), but I would be hard pressed to say any were great.

Harris has some really good leads ("Spanish Dancer").  Crowell does ok on a few.  Then there are some that should really work well and don't quite deliver ("Back When We Were Beautiful").  And then there are one or two that just kind of drag down the disk ("Black Caffeine" for example).

Harris still has an incredible voice and I like Crowell as a solo artist and as a songwriter and producer.  I'm not sure why he didn't produce this, as it was handled by Harris' ex-husband and the man who helmed a number of her disks in the '70s and '80s (and one or two of her last disks).

Perhaps the disk will grow on me, but I didn't get a great first or second impression.  It's fine - but with artists like these, you expect more than fine.
Posted by Blobby at 12:28 AM

one of my faves; rodney crowell's a hottie!