Stuck in a Moment You Can't Get Out Of 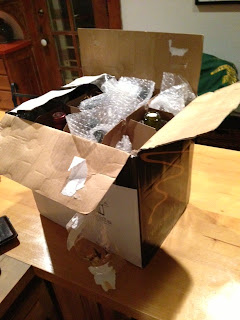 I know you've all been wondering, but despite my shitty-assed work trip,  I made it home - wine intact.

The work trip itself, didn't go so well - but that sometimes happens.  Things don't always go my way, and the would-be wine fiasco.

The trip home was not much better.  The flight to O'Hare was fine. For all the snow they had the day before, there was no evidence of it upon the approach and definitely not at the airport.  Not that it stopped having major delays for the connections.

I don't get the airlines sometimes. Just tell me the flight is delayed by 3 hours.  Don't delay it for three hours, 20 minutes at a time. That's annoying and just operationally stupid.  The plane was coming from Toronto and a quick internet search would tell anyone the plane had not even departed and it was at least an hour flight.  There is no way it was coming in 20 minutes.....then another 20......and then another.

Get it together people.

Still better than the flight to Fort Wayne.  Three hours delayed, 90 minutes on the runway, back to the gate and cancelled.  SUCKS!

We did get out five hours late. Dozens of people on the stand-by list and yet the plane ended up not being full....go figure.

Then I get to Cleveland and seemingly no luggage - and no wine.  Oh yes, I checked the wine.  I really expected a leaking box and deteriorated cardboard. But that wasn't there, nor my suitcase.  Great.

Well, it wasn't on the baggage carousel., but it was there in the United office.

Yes, the TSA went into my luggage and opened my case of wine.  They were very nice enough to leave notes in it saying they had done so. Of course, the box was retaped with a role of TSA tape.

But at least 12 bottles of white and red made it back to Ohio.  Maybe we'll start drinking some of it this weekend.

YAYZ for the wine! bastard TSA!

and since there are only 4 airlines in the US, they do as they damn well please. customer inconvenience? bwhahahahahaha, they will charge YOU big $$$$ to be abused.

Put your feet up, open up a bottle of wine, and relax, Blobby. Stroke cat/dog/hubby as necessary to enhance your wellbeing.

One has to wonder if you could just FedEx yourself to your work destinations. I bet it would be less hassle.