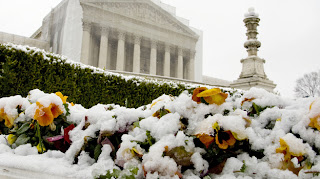 Well, the day is at hand. Well, the first of two consecutive days:  the Supreme Court will be hearing cases for Prop 8 and then on Wednesday, potentially repealing DOMA.

Clearly, I hope things go "our" way. We won't know for months - and even if they do, there are several outcomes that could play out - and some that won't be addressed.

I don't think DOMA will cover if you're married in a state that recognizes marriage and you move, do those rights still follow you. I think it will be uncharted territory and a few more trials, appeals and circuit court appeals before it makes it back to the Supreme Court.

The New York Times had a nice breakdown on the potential ruling of same-sex marriage.

John Roberts really surprised many with his decision on the Affordable Healthcare Act. Who knows who will vote which way on which matter.

What I don't get is the "protesters", on either side, who are coming by the bus-full.  For whatever I think about SCOTUS, them going out and tallying how many people on the pro or con side is not on their agenda. Their not taking popularity votes to see how they should vote.

About the only sure thing to happen is Clarence Thomas not opening his mouth or posing any questions. He's barely said "boo" in the last seven years. I'm not sure he's asked one question in that time.

Ironically, he is the one who should be - given that before the Court's decision on interracial marriage (or which he's a member), he definitely could not marry his wife in Virginia (where he resides). Off all the justices, I'm watching his vote more closely than the others.

Of course, we won't get a decision for months, so it will all be hurry up and wait thing.

We will see how badly the analysts might get this wrong. There wasn't one that I heard after the healthcare session who thought it went well in favour of Obama - and clearly they were wrong.  So I'll listen to the commentary, but I won't take too much stock in it.

I am in pins and needles for this - I thank you for the NYT link to help with the what ifs and hype.

Watching this with keen interest, Blobby. If your Supreme Court can come up with decisions that are both correct and clear-cut, then there's a chance that those (civilised) countries which are prevaricating on the issue will take the American lead and fall the right way like nine-pins.

I'm attending a rally in downtown Indy tomorrow—not for the justices but for the people who still can be swayed. And that's a LOT of people.

Clarence Thomas is shady... and he probably thinks "I already have rights... fuck the fags."