Late for the Sky 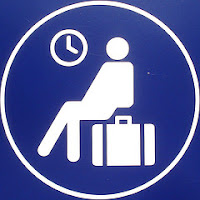 I did not have a blog post planned.  I thought there'd be time.

I had plans to travel this morning, but you know, would have enough time to draft a post the night before. Alas, it was not meant to be.

My travel plans altered and I had to leave at 18:00 yesterday.  I didn't even land until 23:46, which is 02:46 my body clock time.  SUCKS.  That doesn't even count getting the rental car and finding my way to the hotel.  BLERG!

There was no way I was going to think of something "clever" to say at that time of night / morning.  And the joke is I would have had to be up in five hours to head down south to meet my client and potential new employee.

Since the leave time change, there was no proper goodbye to 710.  I texted him to tell him I was taking off today.  Ahhh technology.  It doesn't substitute for hug and kiss - and there is really no app for that.  I mean, i could outsource it, but I think those are called "out calls".

At least Sophie and Petey got the loving from me before I left. It was actually sunny and not horrible out temp-wise, so Petey got outdoor time to wander around the yard. Two 45 minute sessions.

Yes, this is not the glamourous life....I don't care what Sheila E (via Prince) says.

...and it's only March and I'm what, one or two trips away from making Silver status for 2014.  If this keeps up, I'll be Platinum before end of summer - no more ekeing it out at year's end.

Wow - that last statement sounded way sad......on so many levels.

With all the telecommunication technology that exists today, couldn't you travel more digitally?

I'm not a huge fan of traveling unless it is for personal pleasure. I wish you well with your status but wouldn't want to travel even half as much to earn it.

Hope you and the hubby are good.