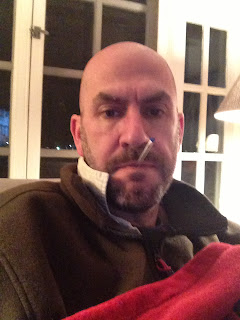 I've been running a fever, or have I?

Sunday night, we came home from my parent's house and I started to get chilly - then I realized, I wasn't getting chilly, I was chilling.

No, not like chillaxing. My inner-core was making my body shiver. I knew the signs all too well:  fever!

It was somewhat early, but I got up, got some Motrin and then headed to bed - which was being pre-heated with the electric blanket.

You know I'm a freeze-baby anyways, but running a fever is different.  Yes, I like the e-blanket to take the chill off the bed and then I turn it off.

But let me tell you something, it was doing nothing for taking the chill off of me. I had it cranked to 7 and it stayed on for a good 30 minutes before 710 came to bed to check on me. I also made him bring me a thermometer.

This was just your standard kind - no electronics, not the kind you put in your ear for an immediate read.  Right before bed, and actually when I woke up in the morning, it wasn't a high temp but was running between 100 and 101.

While the blanket was eventually turned off and I slept ok, though a lot of tossing and turning, but that's nothing new.  Around 04:00, I had a friend join me.  I mean, Sophie almost always sleeps next to me - plugged into me, as it were - but this time she just jumped up on me and laid atop of me.

I see her do that to 710 almost every morning and I'm a little envious. I get none of that kind of love. But I did - she just faced me and purred, then got up, turned around, and put her head down

I wasn't sleeping anyways - not really - so it was quite comforting to have her there for me....because I'm assuming she was doing it as a therapeutic measure.

When morning truly came, it was more Motrin and then the home office all day.  I will be honest, I got little done.  I was tired. I put my head down more than once. I didn't force fluids. I didn't eat a thing.

I had / have no other symptoms. Since it only seems to be a fever (and oddly, lack of appetite), I'm pretty sure it's not "the flu".  I think they just call it "a fever".  But anyhoo - I came downstairs from work "early", wrapped up in a blanky (as seen above) and just did nothing.

Hoping this is out of my system as I am on a plane later this week.  Don't you wish you were sitting next to me?

awwww, you look pathetic. thank the FSM nurse sophie is there for you!

get well soon...and DON'T hop a plane! it's probably where you caught this bug.

You went to work sick, with a fever. Dude. Stay home. No one wants to catch what you have.

I hope you're feeling more human!