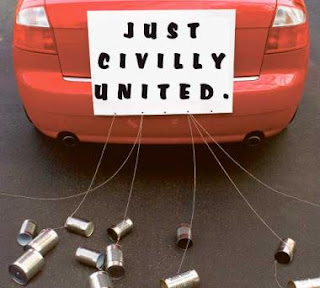 Growing up being the only boy in the house had certain perks:  no hand-me-downs, I had my own room and...well, that was about it.

But I had a dad who liked to do stuff for me - and probably not just me, but I was too self-absorbed to know what he did for my sisters, let alone how.  For me, there was always disappointment.

In Cub Scouts, we did the Pinebox Derby.  It is where you carve a racer out of a block of pine, paint it, decal it, etc for the big race down the track. Don't get this too confused with the Soapbox Derby.  The Pinebox was done in a gym, on tracks and the car was too small to hold a GI Joe, let alone a kid. This was Cub Scouts.

But my dad refused to let me help build it and he wanted to do it his way - the engineer's way. By doing this, he trimmed the axle for a better drag co-efficient (ok, I'm totally making up the reason why). But doing that was against the stated rules (which we / he didn't read) and I was disqualified and didn't even get my car in the running.

Oh, I got a run with the other disqualified cars. I didn't win that race either. I was a loser amongst losers. {sigh}

When I got my trumpet, I got an older, used one that my father stripped off the brass coating, thinking we'd get it redipped. It never happened and from 4th to 12th grade, I played a crappy blemished one.

When it came to bikes, I was happy to have one, but to save a few dollars (or he knew I was queerer than a $3 bill), mine was purple with a purple sparkly banana seat.  I felt like Vanity's younger, white, gay, step-brother.

This is not an indictment of my father. Not at all.

But Colorado passed, and the governor signed, a Civil Unions bill on Thursday.  Good for them?

My first thought was how it was equivalent of the nice things my dad did for me, but they weren't always quite up to snuff.

With all these other states passing Marriage Equality in the last two years and other states (Illinois, Minnesota, Rhode Island) working through same-sex marriage (not civil unions), you can't help feel like Colorado is settling for the hand-me-down or that this is the purple bike of gay marriage.

It's a clumsy analogy to be sure, but if you're speed-reading through my post, it works.

Don't get me wrong.  Any stride is great, and it is certainly more than Ohio has, I don't think I could settle for anything less than full marriage.

Granted, I am married, but it is not recognized in the state where I live, but it's a piece of paper that if we have to show for our domestic partner benefits, we have. It means something to someone and not just 710 and myself.

CNN had a story on earlier this week (I can't find it to link to) which has the perils of married gay couples who move to places that do not recognize such unions. All their rights are now gone - leaving them to redo wills, put things in trust and all that is needed to protect themselves as they migrate state to state - each one being different.

This is not the case for opposite sex marriages.

710 and I have done our wills etc long before we got hitched. We have not put anything into a trust, but to protect assets, we probably should.  Even with Rob Portman's epiphany on gay marriage, I don't see Ohio moving forward on that anytime soon.

If DOMA is struck down, the federal government will have to recognize our marriage, even if the state doesn't.  That will be good in terms of some tax purposes (though state taxes will still have to be filed individually?).  I don't know what it does for Social Security, should one of us die.

But I think if DOMA is struck down (and I think / hope / pray it will) it seems like tumbling dominoes.  I see Supreme Court cases where federal and state laws don't match up and discrimination is provided here, but not there.  I suppose one could follow the CO and WA marijuana laws, as it is still a federal crime to possess yet those states are ok with it.

I also see states giving up the ghost of trying to hold back the tide. It's got to be expensive to repress the homos. States no longer have this kind of money - do they?  We don't even have enough to fix our roads, let alone schools.  I guess it's all the gay's fault.

Yes, I'm glad for Colorado, I just want more for them.  For us.

Hell, I'm thrilled for RI, IL and MN for just having the discussions within their statehouse.  Ohio's discussions are only in petitions, blogs and chat rooms (ok, it's not 1992, but you know what I mean).  We're not even close to having it talked about "on the floor".


I'm tired of settling for lesser rights as a step towards equal ones.


I am looking forward to next week with the Supreme Court. I know there won't be a decision next week, and how it goes might mean nothing. By all accounts, the Affordable Healthcare Act presentation looked like it bombed, but it was upheld.  So who knows?

Song by: matchbox twenty
Posted by Blobby at 12:02 AM

It takes a long time to change a culture, but I hope all signs are pointing towards good changes not withstanding.