Let's just say, Abraham Zapruder has nothing on me.

That guy couldn't document what really happened at the Grassy Knoll, but last Sunday, I took a series of photos I'm not sure I ever thought I'd live to see. It was like capturing Nessie in the Loch.

Petey wanted up with me on Sunday morning, and who am I to deny him?  He almost made me miss yoga because he pressed into me, put it his head down and immediately started snoring.  How could I disrupt that?

Ruckiry (not Jon's boss), I didn't have to.  Someone else took care of that. 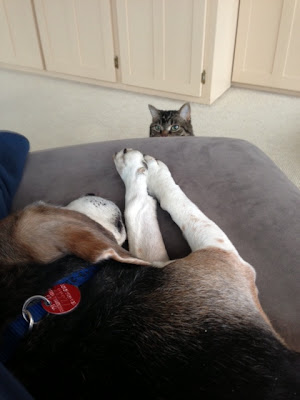 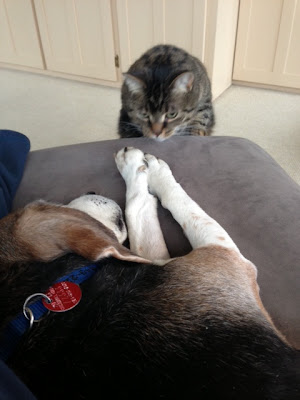 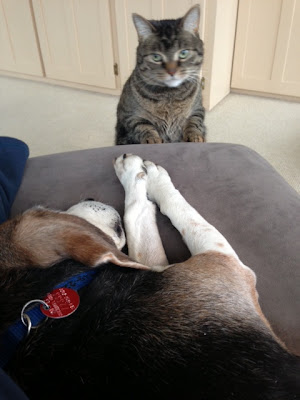 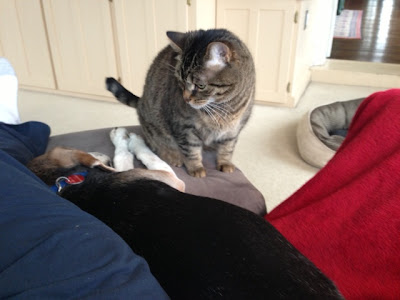 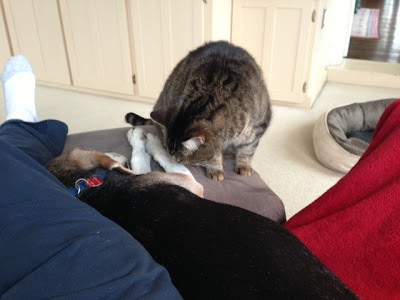 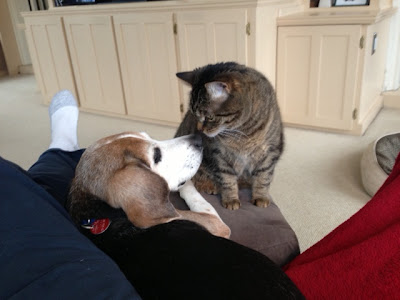 I know they're mine, but this is cuteness overload.

Personally, I like the first and the last pictures the most.

710 will tell you that cartoons lied to him.  He assumed dogs and cats just never got along.  But I know he's seen Petey with my sister's cats when he was still their dog.  And her dogs and cats before that.

There was never any mauling, or worse - no anvils, oversized hammers, giant sling shots or the likes.

Normally, to the right of me is where Sophie would plant herself on a cold morning, but the spot was clearly occupied.  I was hoping she's snuggle up next to Petey, but she found a place on the back of the chair behind my head.

Still it was enough to waken him so I could get to yoga.

Email ThisBlogThis!Share to TwitterShare to FacebookShare to Pinterest
Labels: Pets

I've been paralyzed countless times by Truvy and/or Tramp when they've done the same thing. Those moments of contentment, love, trust and safety is what I think of when people talk about heaven.

That first picture of Sophie peaking over the edge is... priceless.

"what's HE doing up there?" - caption for first pix.

So funny! Both species have the act of sniffing ingrained into them. While dogs do it with great gusto as though their lives depended on it and there's no alternative, cats are so tentative, yet simply MUST have their curiosity satisfied. I got big smiles out of these pics.

I was hoping that they got along.