I'll Take Care of You 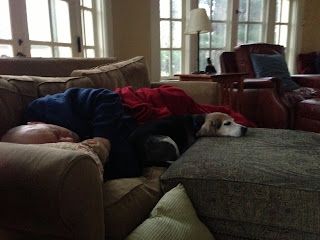 I know folks have been asking about Petey - he's doing much better, thank you.

Here's one of the closest pictures you'll ever get of 710.  He was so worried - well we both were - about Petey on Saturday night, he slept with Petey downstairs on the couch.

Actually,Petey had gone from just so-so to bad after leaving the vet on Saturday.  At night, we considered going back to that Emergency place that tried to fleece me last Fall.

But we decided to see how it would go - and 710 just curled up on the couch and Petey along side him.  That is how I found them the next morning.

Sophie spent the night with me - though it was restless as I was continually wondering how things were downstairs.

Petey was better, but not great, by the time I went to check on them.  By Monday he was mostly eating regularly and back to his spunky self.  He only has one more days of meds left - which is far short of the full month he had to take them last time.

Clearly, I don't have kids, but it's so scary when your "kids" get sick and you don't know what to do for them and they can't tell you how they're feeling.

On a plus note, one Sophie-cat has been worried about her brother and checking him out and sticking with him even more than usual. This is possibly the closest they have gotten to each other (though 710 did see her put her paws into his bed a few days ago). 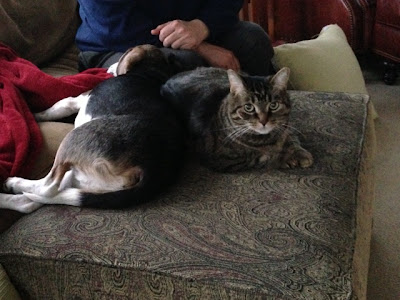 At some point I really want to see them curl up and sleep together.

But thanks for the Petey concerns.  He's doing much better and on the road to full recovery.

Song by: Dixie Chicks
Posted by Blobby at 12:12 AM

awwwwwwwwwwwww, nurse sophie is on the job! our fur kids know when something is not right.

YAYZ for an improving petey! thanks for posting, blobby!

I'm glad Petey is feeling more canine. I'm sure that helps you and 710 not worry as much.

Is Sophie almost as big as Petey?

Get better quickly, Petey, PLEASE! We'll only be happy again when we (and Sophie) know that you're out of the woods and back in robust, bouncy health.
Meantime here's some doggy-recovery positive vibes coming your way.

This a sentimental post. I hope Petey continues to improve. That's sweet that your partner is looking after him so well. Good luck! And BTW... beautiful house!

I am so glad to hear this. Being a dog owner now the notion of a sick pup melts me faster than butter in phoenix.