Apparently we should all "ooh and aah" over mega-right winger, Rob Portman's announcement that he is now for gay marriage.

Granted everyone needs their impetus for decisions and leadership, but because Portman's son is gay, he is now for gay marriage?  (but only if the state and not the Supreme Court says so.)

His son came out to his parents over two years ago, you know - when Portman was running for Senator, but was still against gay marriage and any gay initiatives.  ...and you know what about less than a year ago when he was being considered for Romney's VP, yet nary a syllable of support for his son's community.

Portman claims Romney knew of his son - and was told - but maybe that's why he wasn't selected as his running mate.  If true, that would have been the time to stand his ground as opposed to slinking back into the party lines.

Now that CPAC is in session, his admission (odd how it's not his son's) is a nice test-balloon for the kinder and gentler GOP who lost in 2012. The all-inclusive party is trying to actually include?

You just know the party is grinding the enamel off their teeth, not only at Portman's "surprise" announcement, but that they have to actually pretend to invite us to their reindeer games.

Portman, for all his wisdom, is quoted as saying he "never suspected my son was gay."  Really?   Has he seen the kid? 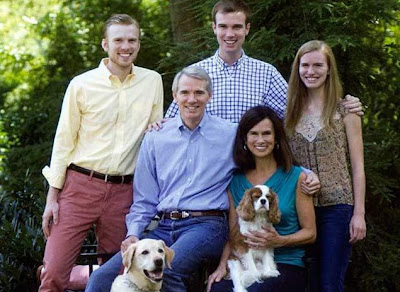 I know it's tactless and tasteless, but what about either of his boys doesn't scream "gay face"?

One could take his reversal on same sex marriage as a win, where he's helping advance our rights, but until his son came out - Portman could have given a shit about us and even actively worked against us.

I totally get that people have epiphanies when they have a loved one who is going through "something", but the reality is, he's known gay people and he just didn't give a flying fuck.  It seems all very self-serving.  (even the Atlantic is calling is "selfish reversal").

When the Sandy Hook shootings happened back in December, I wrote Portman regarding his hard stance against any gun ownership laws or his backing of owning assault rifles. His canned messages were unwavering.

Now I suppose one of his just needs to get gunned down before he rethinks that one.  I'm not advocating that - but they might want to stay out of midnight screenings of any Batman movies.

my spouse had the same thought.

as for me, yeah, I think ALL his kids look gay. and he is pandering to his party - "look at me, I am inclusive"! nope. the h8 is still there.

I will take any advancements. I see it positively; the move people are out/the less others can demonize a people in the abstract, when they know 'real persons'. Sometimes this is enough to get'em to think differently