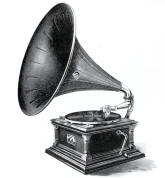 Ok, so this isn't truly a song song.

I mean, clearly it is, but back in the mid-70s, movies like this didn't have soundtracks and even if they did, it would be a short blip of the Count Baise Orchestra, a short blip of Clevon Little singing a railroad song and this - Madeline Kahn singing as Lily Von Shtupp.

Blazing Saddles was on TV the other night - Country Music Television of all places, where they probably saw it more as a documentary - and I always see it through even with the crappy editing and commercial breaks.

Kahn is brilliant as "Lily Von S" (as the edits make her out to be, because you know everyone watching CMT knows what 'shtupp' means, right?).  This role is secondary to her debut in What's Up Doc? - seriously you need to see her in that.

This is a fairly limited role - maybe 15 minutes, tops, but she makes every minute count.

What is brilliant about Kahn / Lily is how she really pays homage to Marlene Dietrich.....not that I knew that when I was 12, but I've learned to notice these things.

Not only in the song funny, but her kind of running the scales between verses makes both 710 and I crack-up. I can't say why, but we just do.  That and her breathing / singing technique (or lack of).

Her repartee with the audience so perfect too, along with her gestures and facial movements.

The one thing that doesn't work for me is Mel Brooks' constant need to bring in the German army - be it Kaiser or SS.  There are only so many times I want to hear "Springtime for Hitler" before it gets on my nerves.....and it loses its welcome, though I know those opinions are my own.  But he does it briefly in Young Frankenstein too - just not in song.

But here is Madeline as Lily.


...and for reference sake, here is Marlene as well, Marlene

one of my all-time fave movies!

I love Marlene's rendition of "Where have all the flowers gone" the best.

Blazing Saddles is one of my "go to" movies when I feel down. I'm not really sure what that says about me though.

And now I know who Marlene Dietrich is!

Are you SURE no song from media has impacted you and changed your life?? ;-)