You Can't Pull the Wool Down (Over the Little Lamb's Eyes) 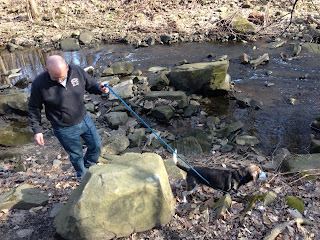 We started the month with a snow storm, and if things hold up today - like yesterday - we'll have a bee-you-tee-ful day today.

Sure, Petey has his walks, but that's just usually around the 'hood, which he truly enjoys.  But while I was at yoga, 710 took him over across the street which borders Doan Brook.  710 said Petey really enjoyed it.

So of course, it was such a pretty day there was a second walk.  A LONG walk  One around the 'hood and then not just over across the street, but down into the woods itself.

...and we only passed two probable homeless people who are most likely living down there. Definitely drinking down there, but possibly sleeping, eating and pooping too.

But the new edition (no, not the Bobby Brown group) to the brook was this.. 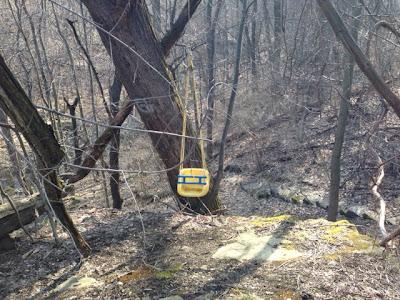 The baby swing that goes over a ledge.

I'm not big on the Boy Scouts, but let's hope whomever put it up and allegedly uses it with their off-spring really really got their knot tying badge.

But after the walk and a big bowl of water, Petey went down and went down hard. 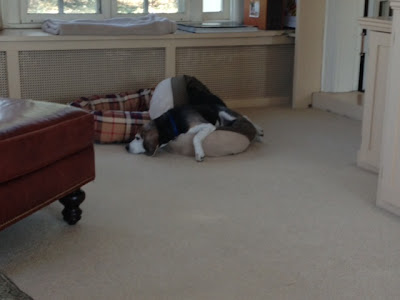 I'm hoping today is just as nice as yesterday.  The dog is going back down in the park.

Sounds like you guys had fun. I hope you enjoy the day today.

Just so you know... it snowed here for a time yesterday afternoon. On April 5th.