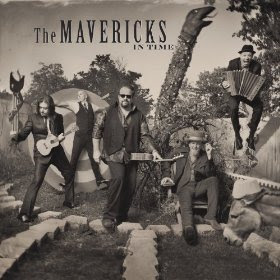 I had no idea a new Mavericks disk, In Time, was coming out.  It has been, like, a decade. I assumed their split was permanent and I went on to buying Raul Malo's solo disks, which actually shined brighter than some of his group material.

Malo has a great sense of artistry - be it solo or in group form. His voice is just so great.  But the styles from group to solo are different enough and I almost forgot what the Mavericks sounded like.

At times the group can lean heavily on mariachi-like stylings. That is fine for a song or two. For an entire album, almost every song, it gets tiring.

The way to deal with that is just not to listen to the entire album at one sitting.  That sounds counter intuitive for that medium. I get that people don't listen to full albums anymore, but I still believe bands make them for that purpose.

I like many of the songs on In Time - "Come Unto Me" (both English and Spanish versions), "That's Not My Name",  "Forgive Me",  "All Over Again" and others.

I will go on record that the roller/ice skating rink organ of "Amsterdam Moon" totally ruins the song.  Horrid.

donna summer at the end - whoa!

I saw the mavericks in concert in the 90s at wolf trap performing arts center in VA. what a show! afterward, I got to meet the band backstage (swoon) because I had won a fan club contest. gracious and welcoming and genuine were they (swoon).

anyway, like you I thought they were gone for good as a group. nick kane is no longer part of the band; there is another guitar player in his spot.

this one is a MUST purchase!

Your quirky "lameness" always makes me chuckle. I think it's all an act and you are Satan the Devil in real life. ;) LOL. Just kidding! Or maybe not?