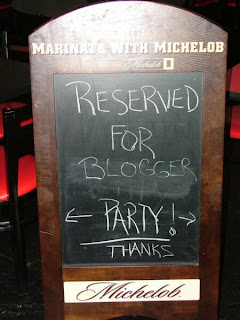 Spo-fest, or whatever it's being called, is a week away.  I shant be attending.

Don't get me wrong, I was invited - though not by the host - but I was asked if I would attend.  When I say that out loud, it makes me sound third or fifth wheel-ish.  Truth be told, I don't know the host. I don't read his blog nor link to it.

I don't know how it all works, but Spo and Someone are going to Delaware for this event, or because of this event, or.....something being built around a trip they already planned that way.  I don't know the exact details.  They are just the guests of honour.

Oddly enough, the only two folks I've met who will be attending this are Spo and Someone.  Some of the other names on the tentative list are familiar to me - some I link to, and others I just don't have a clue. It's a gigundo blogger meet-up.

Now, on my Myers-Briggs profile, I am dangerously hover between an I and E. One-on-one blogger meet ups I've had no problems with.  Actually, all have gone surprisingly smooth. I don't know how I would do in a larger setting of 15-20 bloggers. Granted, the focus isn't on me, so maybe there is no social issue that would incur.

Truth be told, as much as there are a few folks there I'd really like to meet, and most likely will eventually (I've already met 36% of my blogroll - yes, I did the math!), the thought of more travel just might do me in. Lately, I've been gone from home three days per week for the last few months. It's draining. Absolutely draining.

When I'm not traveling (and even when I am), I so just want to be home. I want to be with 710, the cat and the dog. I want to do yoga with my cousin and our cohort. I want to have tea with them afterwards and just hang - then go home and hang some more.  And of course, someone has to do the laundry. It ain't getting done by itself.

I don't know how Delaware is in March. If it's anything like Ohio has been, ick. No offense to Delawarians. Delawarites?

I did ponder the invite for a number of days before making my decision, so it wasn't a slam-dunk "no" of a response. I weighed the decision, based mostly on work travel and just couldn't see getting home late Thursday night and getting right back on the road. I also couldn't reconcile going to Delaware and not seeing other friends who reside in the first U.S. state. Time is limited.

I do hope all have fun and it will be interesting to read the different blogs and the varying perspectives. I can't imagine all will have the same experience. I hope they wouldn't - as we are all individuals. Though I don't expect it to become an episode of the Real Housewives of Beverly Hills, but c'mon, that could be fucking interesting reading.

It started with me wanting to meet Ron of "Retired in Delaware". Some local bloggers who know of me decided they would drop in. Readers heard of it, decided to come too - and it grew into a weekend for 2 dozen or so bloggers to meet up for the first time. I know 3/4 of them through their blogs; none of them I have met. I hope it is fun.
I am happy to have met you on a one to one; and really look forward to seeing you again!

I won't be attending either. It's just as far from Arkansas to Delaware as it was to Arizona where I was lucky enough to meet Spo and Someone, as well as a couple of other bloggers.

Maybe one of these days everyone should come to the middle of the country for a party.

it would be nice to meet you. but I hear ya about MORE travel on top of what you already do for work.

I will lift a cosmo in your honor, and erik's honor, and to all my other blog friends who cannot be with us in person.