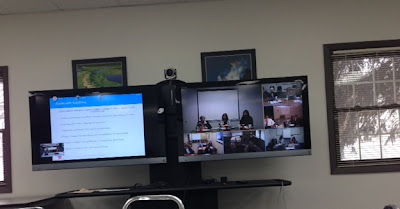 Oh, I remember a skit on the Carol Burnett show regarding when  / if we get video phones and how hard it would be to keep things secret as one talked.

I'm sure the Jetsons covered it too.  I'm guessing Carol & Co were funnier about it.

We have that issue with FaceTime now, or Skype or any other of the mobile apps.

But I finally had to endure the future (for us anyway) of a regional teleconference meeting. Eight hours of 16 people in seven locations talking, giving or listening to presentations.

It's a new, fresher Hell.

Can I tell you how often I wanted to nod off?  Or to look at my Blackberry Galaxy S3?  Or my laptop?  But nooooo......you can't do that with these.

One must feign interest.

I don't do that well.

As you might imagine, it probably took the first 45 minutes to work through the technological issues and then we were just playing catch-up after that.

Sadly, this probably is the wave of the future. It's cheaper than getting 16 people off-site, with air fare, hotels and food.  I have friends who have interviewed via video-conference - that seems less of a disaster, but you might be able to get away without pants while going through your skill set and background.

Too bad I couldn't have gotten away with sitting through the meeting in sweats.  Or with a doggie next to me.

Song by: Everything but the Girl
Posted by Blobby at 12:36 AM

what happens if ya gotta pee or eat? and let's not even talk about scratching oneself.

OMG I laughed when I read this. Now what are you going to do? Now you won't be able to put the phone on mute and walk away for 45 minutes at a time. If you were smart you would get a life-sized cardboard cutout of yourself and place it in front of the camera. They won't know the difference ;-)

Blobby, the weekend is upon us and we'll be missing you. Me especially.

Welcome to my world. This is how I work everyday and have not traveled for business in years.