Another installment of a disk I have enjoyed over the years. I'm trying to keep the Record of the Month posts to be fairly new releases. Classics are going to be ones that are at least 10 years old. Beginning 2011, I thought I'd focus on debut disks - just to make it more challenging for me. I don't think you'll care one way or the other.  This selection is not a debut album. 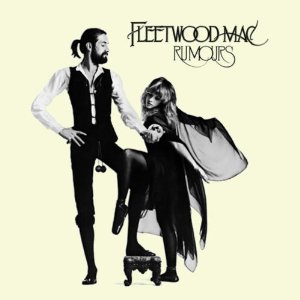 I think I'm only reviewing Rumours due to the seemingly incredible hype of Warner Bros releasing a "deluxe" version of Fleetwood Mac's best selling album to date.  The label is billing it as the 35th Anniversary edition, but in reality, the release date was about 10 days short of the 36th.

There have been stories on NPR, Today Show, CNN, etc.

The album re-release also coincides, not coincidentally, to the sexagenarians touring in 2013. Fistfuls of cash for their IRAs.

Don't get me wrong, as an 8th grader, I loved Rumours. I bought my first vinyl copy back in '77 - and eventually went through two or three more, I played it that often.  I still like it, but I don't listen to it as an album anymore, though it works well if listened in its entirety.

The first CD transfer was horrid.  The remastered version in 2004 was much better and the extra disk of material was....well....underwhelming.  It contained a lot of alternate takes or demos from the Rumours sessions.  If nothing else, it showed you the band made the right decisions on which versions of the songs to select as the best takes.

While I have not, nor plan to, purchase this super-duper deluxe version (and there are at least three different packages available), I have gone to iTunes to sample the music.  Hey, I'm still a fan.

It does not sound like the original disk is different than the 2004 version, except for moving one track to the end of the sequence. The second disk is a live concert recording from 1977 - and I think know I can live without that.  I can also live without yet two other disks of outtakes, demos and discarded songs (and mostly rightfully so).  And yes, these are different than what was included in the 2004 version.  It's like picking through someone's trash.

I will say there are maybe three songs worth listening too, mostly for being inquisitive.  Stevie Nicks' "Planets of the Universe", in demo form, showed promise and proved to be an interesting song - at least until she recorded it by herself two decades later. She clearly needed the Fleetwood Mac brand to make it work.  Christine McVie's unrecorded "Keep Me There" really showed the older Fleetwood Mac blues roots, and something that would never have fit in with their southern California sound they were now sporting.

While on Rumours, "the Chain" is credited being written by all band members, but the "original" chorus was lifted from a never heard Nicks song of the same name. I don't know I need five minutes of that, but the origins are interesting to hear years later.

But it really comes back to the original disk.

Yes, it is very radio friendly pop-rock. Yes, it's easy listening - and whatever personal issues went into making the music I'm sure reflected on the outcome - but the band and the press make the personal issues the focus.  Not the music.

Really, the music is tight, it is well written, well performed and the vocals well arranged and harmonized. And that is really what it comes down to. There are a lot of records that are pushing 40 years old that sound dated and 40 years old.  I really don't think Rumours does.

"Dreams" is still a very well crafted song, as is "You Make Loving Fun" and "Go Your Own Way". And still, "the Chain" was an incredible song that was never released as a single.  And all of these songs were not about break-ups, but that's all people think or remember.

The funny thing about Fleetwood Mac on record vs in concert is that they do put on a decent show - and much more of a rock band than pop concoction.  Well - that is mostly Lindsey Buckingham's guitar work, but they're not as "lite" as you think.  But you won't find that (mostly) on recordings.