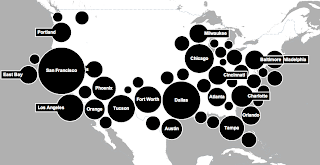 I wouldn't say this is a "fun" site.  It's an informative site, but it's not full of laughs - unless you're Quincy M.E.

Crime Map actually tracks the amount of, well, crime, in certain cities.  You can break it down by Robbery, Theft, Burglary (three things that sound similar) Assault, Arson, Shootings and "Other".

I guess "other" is Murder and Rape.  Maybe Indecent Exposure.  Or George Michael cruising spots.

Oddly enough, Cleveland isn't on here, so I don't have a lot of frame of reference.  DC isn't either or some of the other cities to which I travel.

Just a geeky thing to look at and see what's going on in your neck of the woods - and which of those woods you should stay away from.
Posted by Blobby at 1:25 AM

Mr Michael already has an app for that.