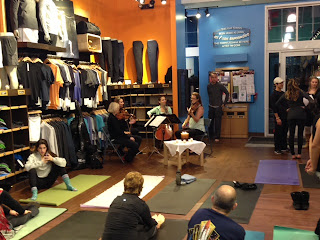 Last night, we did something slightly different.  We, being my cousin and myself.

Yoga isn't new, but that's what we did.  However, we were accompanied by four members of the Cleveland Orchestra.

Actually, it was very nice.  The music was well  played - as you'd expect from a world renowned orchestra.

They played pretty much familiar pieces - be it Canon in D (and no one was getting married) and Bach Suite in G Major - which really always reminds me of Josh Lyman having a PTSD episode on the West Wing.

It was a 75 minute class, a tough but good class.  But afterwards we had treats. 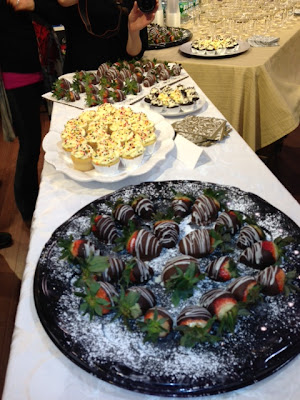 Bad champagne, cupcakes, vegan cupcakes (ick) and yes, chocolate covered strawberries. I had one glass of the bad bubbly and two strawberries. The were covered with dark chocolate and it was fruit, so I know it had some healthy aspects to it, so I feel ok.  And I did just do a 75 minute workout, so I worked off the calories before I even ingested them.

David says he can cross this off his bucket list - as if it was ever on it, but if makes him feel better to say it, so be it.

Now that we've done belly dancing, orchestra yoga and yoga without borders, we're trying to figure out 'what's next?'.

Song by: Alison Krauss + Union Station
Posted by Blobby at 12:54 AM

chocolate covered strawberries are good for you; dark chocolate for a healthy heart! classy way to practice yoga!