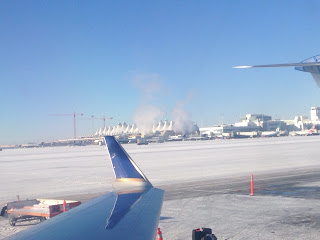 I'm back on the road.  California.

Well, maybe not in Modesto.  But you get the idea.

Yes, I know the image is not California.  It's Denver.  Snow covered Denver. Actually, whatever weather they were having didn't delay my landing or take-off.

However, returning to Ohio on Wednesday could prove to be complicated.  A storm from Texas to Maine is hitting - and on Tuesday and/or Wednesday, Chicago could get 6-12" - and they are already starting to cancel flights!  Oh - I'm flying home via O'Hare.  Or perhaps not.

I'm thinking tomorrow I might try to fly through Denver or Houston, though all of those might be non-starters. Houston, in theory, seems the safest, but if Texas is getting 17" of snow in Amarillo, even if Houston gets a little, it could cripple the airport.

Eh - I'll worry about it later. Right now I can't be bothered.

ugh! stay in CA an extra day to give the storm a chance to finish?