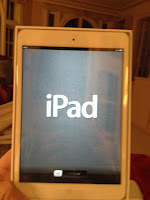 It's quite possible I'm one of the last people to get an iPad.  And iPad Mini, to be specific.

To be honest, I'm still not 100% sure what I'll use it for.  I resisted the urge when the iPad3 came out - even though I went to the store to purchase one.

But three weeks ago, an Apple gift card was burning a hole in my wallet and I just couldn't see using all the dough on chargers, cases and new earbuds.  So I went for it.

I know it doesn't have the retinal display everyone is griping about, but I have compromised eyesight as it is - would I really notice that much of a difference?  Je doubt it.

710 was visiting his parents and I called, not looking for permission as much as searching for justification.  He was encouraging - saying I never buy anything for myself, which is somewhat true.

Yet here it is, exactly three weeks later, and I finally opened the box.

Somewhere in the back of my mind, I thought I might return it.  But mostly, I always delay opening these things. I think somewhere I feel I don't deserve them.  Don't ask, I have no rationale for this thought process.

But it's unwrapped. Email accounts have been set-up.  Purchased music has been iClouded in.

It will be good for travel - work and non.   Maybe I'll finally have an e-reader, though I can't see giving up 'real' books. I like the way those feel. 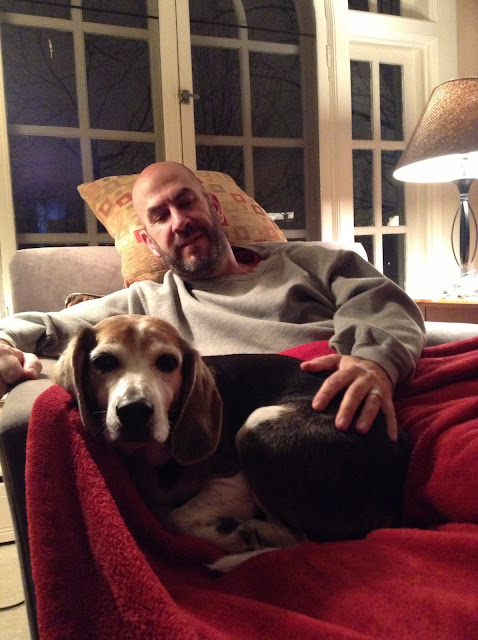 He wasn't raised to cuddle, so this is a work in progress. He asked to come up, pawing at me and the chair.  Peter just curled up and went to sleep.  What a love muffin.

Eh, so we'll see how the Apple product goes.  It seems fine, but it is only Day 1.   Well, technically, day 21....but those first three weeks didn't really count.

Song by: Pat Benatar
Posted by Blobby at 1:19 AM

I don't have an ipad and I never will. so you are NOT the last person to get one. bwhahahahaha!

I'm going to 'ditto' A.M.'s comment. Besides, if I had a loveable being like Petey wet-nosing me, I wouldn't want a distraction like an iPad thingummy (whatever it is!) to come between us and be a distraction.

I highly recommend a Zaggfolio keyboard and cover if you type on your iPad Mini. Makes it fully functional and they're having a half-price sale right now:

Two cuties on that chair. :)

You let your baby languish in a box for THREE WEEKS? Why not just crate Petey for 3 weeks-- Monster.

Oh, and I was also a "I like the way real books feel" guy... until I started thinking about how much waste each book causes.

And then I discovered eReading.

I was wanting to read the latest Michael Thomas Ford... oh, you mean I can get it cheaper in ebook fashion? And I just bought it with one click? From my bed? And can read it immediately??

Hello! I'm a long time lurker, very recent blogger. Nope, you're definitely not the last to get an iPad. I'm right there w/ Anne Marie and Ray. I'd love one, but it's a disposable income thing for me. (Kids will consume all available resources!)

We have an original iPad. I'm not a fan of it. It seems to clunky in my hands. The Husbear likes it, but he uses it mostly in the bathroom. So I have no idea what he does with it. I don't really want to know.

But the moment I picked up a mini and played with it at the store... LOVE!

Great shot of you and Pëtey. Why is there an umlaut over the e? Don't know how I did that.

no ipad here neither.