I Miss My Mary 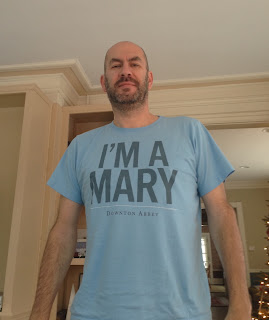 Yeah, it's already been on in the UK, but I've made my mind up not to read anything about it.  My friend Sal (Philly Sal, not Cleveland Sal) streamed the UK version weeks and weeks ago and has been threatening to drop spoilers.

He never reads this, or rarely, so I'm feeling pretty confident in saying that without repercussions.

I don't exactly understand why it is shown on the BBC months before we get it. Show it simultaneously, why don't they?  Where's the harm?

My t-shirt? It was a gift from Rebecca.

For those who don't know the show, three of the main characters are sisters, Sybil, Edith and Mary.

Apparently, I am a Mary.

Sure she is strong-willed, adventurous and occasionally boffs the Turkish attaché to death, but Mr. Pamuk wasn't bad looking and he'd already turned down an advance by Thomas, the footman.

...and I'd rather be a Mary then an Edith. I could live with being a Sybil.  Mary has a cleaner shave than I do.  ...at least on her face.

Yes, being called 'a Mary' could take me to task regarding my masculinity, but a t-shirt or a name calling isn't going to bug me that much.  I've worn the shirt with pride, even to yoga.  Poor Roy asked me about the shirt.  I just said, "it's a gay thing".   .....but then really told him about it, as he had never seen the show.

I applaud Roy though.  No one else dared ask.  I'm sure they were afraid of the potential answer.

Well, here's hoping Shirley MacLaine doesn't ruin a good thing.  Oh - she'll be in an episode or two this  season.

Song by: Hal Ketchum
Posted by Blobby at 2:45 AM

That image will be forever burned into my mind.

I haven't watched Downton Alley. Apparently it must be a thing. I usually miss the things.

You know, you could always get those episodes via a torrent or two and watch them before everyone else....

A Mary from the Western Reserve. How appropriate.The view from So. Florida showed your world of flight travel. No thanks. I guess I am a Thomas, shady and self centered. Happy New Year!