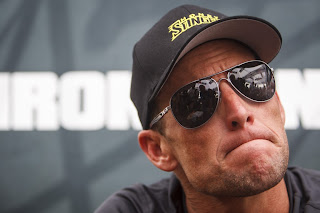 I was going to use the Go-Go's "Apology" for the title, but then I realized I don't give a fuck if Lance Armstrong apologized.   Nor did I care when Tiger Woods did - or Mark Sanford, or....

I guess I could have used Elton John's "Sorry Seems to be the Hardest Word", but it wasn't hard for Lance - just an act.

Even without all the revelations of intimidation and threats to his teammates and spouses, I always thought Armstrong was insufferable.  It's actually that kind of behaviour that is worse than his performance enhancing usage.  The man thought he was untouchable - of course the joke is, everyone knew it, or suspected it, and just couldn't catch him.  Or they possibly looked the other way.

How is it he and his team could outsmart science and testing?

I hear the comments:  "yeah, he was doping, but he raised $500MM for cancer......".   The reality is, he probably couldn't have raised more than $1.15 without his notoriety from those enhanced wins.  And records are unclear how much he personally benefited financially from Livestrong, so I wouldn't say he raised that much for cancer.

Sure, there have been other on-line comments about how his inspirational speech to Peter LeFleur has forever ruined Dodgeball for many.  Or that with all his riding experience, that Lance should be better at back pedaling.  Both of those made me smile.

My perverted mind would like to think that his years of doping is what caused his own cancer. It would be sweet irony, but I don't think the timeline works out correctly - not that we should believe how long or to what extent his abuse started.

Perhaps Sheryl Crow should look into what gave her both breast and brain cancer.  Maybe she should have made Lance use a rubber when he was porking her.

What I can't figure out is why he's coming "clean" now?  There is an underlying motive and it's not from guilt and it's not because he's been banned from running in triathlons.  It's something else.....I just don't know what.   ...and yet, I really don't care.

Song by:  Marilyn Manson
Posted by Blobby at 1:57 AM

Maybe he lied about having cancer too.

I am just delighting in all the crow that folks who defended him are eating. Like my step bro.

Every single pun I wanted to reply with you ended up using. Dang it.

I think the mea culpa was because all that evil inside him and the stress will make the cancer return.

And nobody is talking about how much money Lance made off of Cancer. Oh come on, you don't think Lance did all that work at Liestrong for free do you?