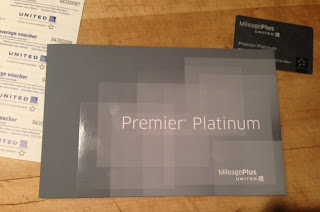 I have no idea how this happened.  I achieved Platinum status.

When last we tuned in, I was about 634 miles short of getting to this level.  I considered taking a short jaunt between xmas and New Year's just to get to Platinum, but when it came down to it, I could not stand to get on another flight.

Not only that, it wasn't an easy flight to NYC or Chicago and back.  Chicago didn't offer enough miles and the NYC and Boston routes were ridiculously expensive.

Even before xmas, United sent me my 2013 Gold mailer.  710 thought that very premature of them, since they couldn't be sure I wasn't going to take another trip.

Imagine my surprise yesterday when I got the Platinum package. I mean, I even booked a trip two days ago and if it said something on the United site, I missed it - or wasn't paying attention.

As it is, there aren't tons of things for which I'd use the status upgrade. Priority boarding is one - yes, it seems like a little thing, but getting that overhead compartment space is key.  Yes, getting more upgrades to first class is a good thing too.  I won't be complaining about that.  IF I went anywhere that I used a suitcase that didn't fit into the overhead, I would be grateful for being able to check three bags at no cost, but I don't see that happening.

Oh, they also gave me a handful of complimentary drink vouchers - for alcohol!

The joke is - I dont' drink on flights, even when I'm in first class and don't need the vouchers.  I mean, I'm usually on 06:00 flights or red-eyes.  Either way, I'm trying to get some shut eye, not pounding the booze.

So, I got there and didn't even know it.  Now, let's see if I get upgraded more often.  Would be nice.

Congratulations! I think. Why do I feel like this just means you moved down to a new ring in Dante's Hell?

the Platinum card won't clash with your grey hair so much now.

You get to waltz on that plane any old time you like now. congrats.