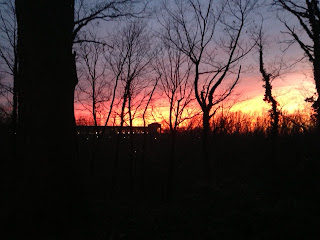 I'm tired of being cold.

You all already know that I have trouble warming up in the Winter months.

What a shitty week for weather.  I hate to say it, but my doc appointment on Thursday was the first time I actually left the house since seeing Zero Dark Thirty on Sunday.

Yes, it sounds (and is) sad, but in my defense, I do work from home and did have to open the door often to let the dog out to do his bidness.

It's frigid out there!

I know Petey wanted to go for a walk, but in other ways, he wanted right back in after 52 seconds.  ....and I wasn't taking him on two or three 1.5 mile walks per day.

I felt so bad when I was going to the doctor though.  He saw me put on my boots and coat and he was SO excited.  He thought it was go-time, but it was not.

Yesterday I made a concerted effort to get him out.  I took 30 minutes from my work day and froze my face for an around the long block walk.  It was all of 13 degrees - not including the wind.   I had my YakTrax on for good measure.  I can't afford another fall.

Allegedly it is getting up into the 20's the next two days.....and then to almost 40 by Tuesday.

Yeah, it's been a brutal week, but I have to remind myself:  it is January in Cleveland.  Usually it will be like this for three weeks in a row - and even colder and with more snow.  It's still be a decent enough  Winter.  Though I do hope this was the worst of it.

we never got above 22F this past week. and the weather is playing all kinds of hell with my asthma.

ah well, baseball season begins in 3 weeks. what's cleveburg going to do this year? I'm not sure where the phillies are headed.

I kinda don't want to hear it. It's been WAY colder than that here.

It's been really cold these days especially during the night. Even in a tropical place like ours, the temperature still continues to drop.

I had to wear a long sleeve shirt today. Life is brutal!

come visit ! It's not too bad next week !

We've not fared any better out here in Boston although I've been assured of a warm up come Wednesday when temps are supposedly expected to hit the low 50s.

Since you work from home, you could always move to a more southern location....