A Case of You 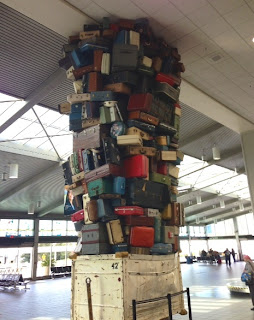 And the indignity of being Platinum status amounts to the same as Gold. Maybe a 50% chance of getting upgraded.  I got First Class on the second (and longer) leg of the trip, so that was ok.  And it had Direct TV, but all the movies sucked.  When a Clint Eastwood baseball movie is the best of the bunch, you know you're fucked.  So I sat and watched three and one-half episodes of SVU.  Sigh.

I think I also learned my lesson not to eat the hot breakfast in First.  Just go for the corn flakes. Egads, those "eggs' are horrid, but the mystery meat is much too mysterious for my tastes.

It is not looking good for upgrades on the way home, but I'll have aisle and exit rows, so I'm good.  It beats the back half of the plane and middle seat.

I am finding it harder to be away from home and miss 710, the cat and dog more and more.  I feel Petey needs me at home, even though in the Winter months he snoozes more than he's awake. Maybe I need him more than he needs me - except at walk and feeding times.

I don't think they'd let me keep this job and not travel though.

I'm currently a little south of Sacramento, but fly into that airport. I've been there a number of times and never noticed the art at the baggage claim area.

"Samson" has a similar installation a few hundred feet away, but I thought it was clever. I don't know the artist, but I guess I should give out a shout-out to Brian Goggin, since I did take notice and pictures.  I noticed after I took a snap, many others started to do the same.

I took pics from all angles but this seemed to be the best, but none conveyed the art itself.  I really liked it - but I mean, not to have it in my house or anything.

So another full day here then I head home. I refused to take the red-eye back, so I'm out on a 05:40 flight. I think that will be better.

so THAT'S where all the lost airline luggage goes!

Glad you enjoyed it. I worked for the Department of Airports when Terminal A was built and remember when the Metropolitan Arts Comission came with the sketches. Next time you're there, look at it a bit more closely and you'll see the Fire Alarm horn and strobes. Watching them assemble it was amazing.

PS There are two other pieces in the building that deserve note. One is the clerestory band above the storefront system (images of the river) and the other is the carpet in the bridge to the parking garage (images developed from aerial photographs of the valley).

You should totally replicate that installation in your front yard. Except maybe out of car parts that end up in your yard.