Cute as a Bug

There are no Muses today.  They've taken a day of PTO, it seems.  Maybe longer.  How else can you figure with 19 days in I've already done at least seven of my "standard" posts.  I'm not even pacing them.

But here's another good thing about having a dog - picture posts where everyone ooohs and aaahs - and it doesn't take me much thought, yet still allows me to publish. 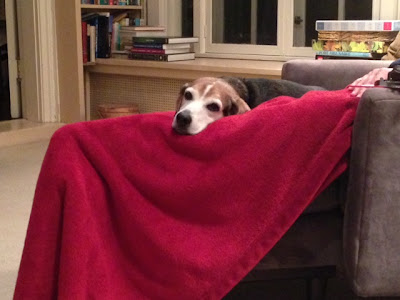 Petey doesn't really get up onto the furniture anymore.  The first few weeks we had him, sure, but since then - not so much.  But truth be told, now and again we try to get him up to snuggle.  It's a non-starter.

So what does 710 do?  Picks him up to bring Petey to the chair to cuddle with.  After he finally settles in, he looks so comfortable - and 710 looks so happy with him being there.

Sophie, on the other hand, is quizzical at why Petey has her place next to her dad. 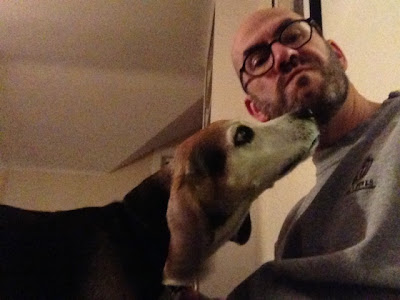 And at least once a day, every day, I have to get down on the floor to play with him.

This time, it was late in my workday and I figured I'd schmooze with Peter before I wrapped up the day.

I also took a pic and sent it to 710 to entice him to come home.  But until then, I was getting the kisses.

Song by: Lyle Lovett
Posted by Blobby at 1:08 AM

Remember when you used to post pictures of Sophie all the time? Oh wait....

You really love him.