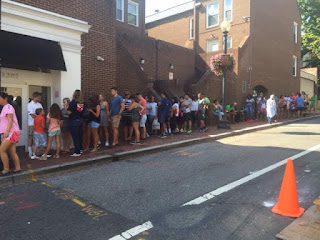 During my day of solo walking, I found myself going all the way from the hotel, to the Liberry of Congress....to the Lincoln Memorial, Vietnam Memorial and then down to Georgetown.

It was a hike.

When I got there, I wasn't expecting "the line".

Back in 2010 when we got married, the plan was to have cupcakes from here for our wedding. A downpour and no Metro to Georgetown thwarted that plan. I decided to get in line to see how fast it moved to right that wrong from almost six years ago. Worse case scenario, I could hit another shop - Sprinkles - on my way back.

Ruckiry (not Jon's boss), the line was in the shade. Had it not, I would not have stayed 30 seconds.

Je didn't time the wait, but it wasn't that long, though I did start to think about what a potential waste of time this could be if the cupcakes were even just average. I've said before, this is a great business model: ~$3 a pop and by the time you find their iffy you're already out of the store. I've made many a iffy....or downright bad - cupcake.

Yet I remain forever hopeful.

I was also worried with this crowd that there would not be any product left to purchase. Silly me. 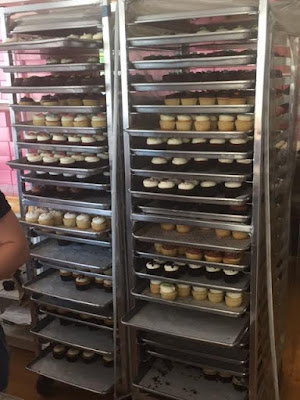 And this wasn't even all the racks.....or the huge display case.

There was no way to walk all the back to the hotel without fear of them succumbing to the heat - as it was almost 100F.  I opted to take the bus. With none in site, I walked until one caught up with me - so I got another good 1.5 miles in. Still the bus with a/c was nice. I had no idea where it was actually going, but it was headed in the general direction I needed to be.

Oddly, we ended up not consuming one of them while in town. Our last night of vacation dinner was late and we had no desire to eat more. They would keep.

Sunday night - at home - we each had one. I was fairly impressed. It was a good cake to icing ratio. If you're not an expert (like me!), you might not know that most places pile on the frosting where it is impossible to eat the dessert with out a fork and plate. Usually the frosting is too sweet and there is never enough cake - nor is it moist enough.

All the elements of good were here. At least for the one each we sampled.

I got a variety - so we will see if this holds true across the cupcake spectrum.


And while you'll think I'm pathetic to stand it such a line, I'll let you know the line was twice as long to get into Ripley's Believe it or Not.  ....and for what?  A wax statue of Michael Phelps or Ronald Reagan?

I sincerely doubt that wax statues are very tasty so I'm betting you made the right decision.

6 years married already? how time flies! but nope, I would not stand in line for a cuppycake!