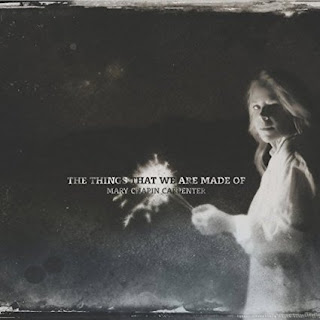 That's what I was listening to the new disk by Mary Chapin Carpenter - the Things That We Are Made Of.

Don't even get me started that the title ends in a preposition.

I used to be a huge fan of hers. Then a fan. Then.....an observer - even though I own everything she's put out. I told myself after a few same-sounding / rarely varying disks that I wasn't going to buy into it anymore. Yet here I am.

Don't get me wrong, the Thing That We Are Made Of is well, if not sparsely, produced - and gratefully not from Matt Rollins, the producer of 2-3 of her weakest albums. Chapin's voice is still smooth and comforting. It's the songs that lack...at least for me.

I'm fine with life in 4/4 time. Chapin used to provide variety - now, not so much. I get songs about introspection - and hers can be some of the best - but there is only so much navel-gazing one can endure at a sitting.

I am not sure the sequencing works that much either. Four 5-minute ballads end the disk. It's a slow mover, especially when everything is the same tempo. After a while it felt like one 20 minute song.

It is hard not to like Carpenter as an artist, as she is clearly talented. I get that with illness and divorce you have things to feel and say - but she kind of did that on her last collection of original material.

Remember when Chapin used to be fun and funny?  Yeah - you won't find that in the last decade. When she plays live, she shows that whimsical persona, but it doesn't appear in her recordings anymore. And that's kind of a shame.
Posted by Blobby at 12:01 AM

I will always love "The Bug" and "Shut Up and Kiss Me". I'm quite shallow that way.
Deedles