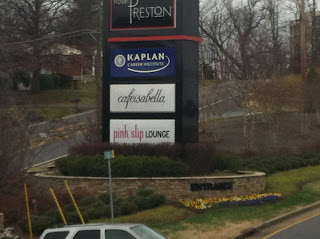 It was taken at the last gas station before you returned your rental car to the Nashville airport.

As I was gassing up, I chuckled that someone would name a bar the 'Pink Slip Lounge'. How many people get fired in Tennessee that can fill a place like this on a daily basis.

It's like this bar called the 'Recovery Room' right across from a hospital I used to do business with.

I suppose the Pink Slip could be a drag bar. That seems to make more sense.....except for the location.

The plan was to never right about the lounge. But I did fire someone yesterday. I knew it was coming - she did not.

Oddly - or perhaps not - it was not performance related. And in another way, it was.

The real reason for termination was budget related. Those firings are never fun. And while you could say no firings are ever fun, I'd be lying if some of them you didn't take a little pleasure in losing the employee.

HR was all about the last one in model. I fought back.

If we went that way, and the person who I ended up letting go had to work for the set of docs the person HR wanted to let go, not only would I not have secretarial support, I wouldn't have the docs...they'd all quit before they let this person be their assistant.

While I was away, legal did the entire process of okaying my selection. The person does have performance issues....and attitude issues.

I made a mistake in the termination. I waited until the end of the day when most people were gone. Which meant, I had to bide my time all day waiting for this to happen. I wasn't upset or nervous, I just wanted it done.

Firing someone isn't like it used to be. Now you do have to worry about violence and well....guns. It is much more prevalent now-a-days. Let's just say I was aware of my surroundings when I walked to my car. And I left 'early'.....you know, when normal humans do....just so I could use them as cover. Like normal people would.

All that said, the person in question never saw it coming, nor should she have...and questioned me on why I didn't give her the head's up.

For the most part, she was very professional. No tears (good....I had no tissues). No screaming. No cursing. No telling the few stragglers left in the office or even calling home to tell her husband.

I suspect that will change in the next 24 hours - the tears, the yelling and such. I had the option to keep her on for two weeks, but opted to pay her for that time and have her leave immediately. Less workplace disruption.

Her workspace is a disaster, but I left it as is....for now.  I did not want the staff to come in this morning and notice I've tossed everything and cleaned out her stuff. Heck, unless she called people afterwards, they don't even know she's gone. I will inform them at an impromptu staff meeting at 09:00 today.

Oddly enough, I felt like I needed a drink after it was all over, but I was afraid of running into her at the Pink Slip.

I don't envy you or anyone who needs to fire somebody. It sounds painful and tedious and indeed potentially hazardous.