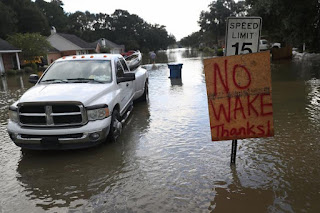 All the up-in-armsness about Obama not visiting Baton Rouge earlier than he did.

I get it - it was kind of a dick move on his part. Certainly, you don't want Il Douche beating you to that punch - yet he did. But that said, his not going on time wasn't quite as bad as Shrub and Katrina.

With Shrub, he just ignored the entire situation - including the storm warnings.

Obama playing golf instead of going? Not the best move he's ever made. Maybe the Louisiana governor was right that he shouldn't be there that early, as it would impede rescue efforts. And there is something to that - even if I think he might have been covering for 44.

Yet the whole thing reminded me of a West Wing episode where Bartlett goes to Oklahoma (or Kansas?) after a tornado wipes out a town. And he won't leave readily. And he's read the Riot Act by CJ.

After Bartlett says that these people need him, she kind of goes off saying "No! They don't".

She goes on to say, "they need the 50 hotel rooms we've taken, since they don't have homes, they need the police helping out instead of clearing streets for your motorcade".

Honestly, there is sense to all of this.

I get it might be of comfort to the citizens to see an authority figure, but meeting the president isn't really it - at least in my book.

If federal agencies are mobilized and the people are getting the help they need without the red tape - that is the biggest comfort and need of all. If Obama went to DC to get FEMA and all other relief agencies to get in gear, that says more (to me) than anything.

I think CJ also went on to say that the President should be in Washington helping create jobs that will pay the taxes to support disaster relief.

Obama should get his time off. I don't begrudge him that. He's still way more responsive than Bush and he didn't cover up the lies regarding communication of the events.

Still, you don't want the GOP playing up piddly ass crap like this, and they were kind of handed it on a silver platter.

Song by: Lone Justice
Posted by Blobby at 12:08 AM

To be fair, he was asked not to come by the governor, and, had he come, think of all the manpower and resources that would have been diverted from the victims of the flood just to protect him and move him around the area.
Roads shut down while his motorcade passes through ...
People clamoring to meet him rather than passing out food and supplies ...
He wasn't going there to pass out Play-Doh and give money to bigot churches ... that was [t]Rump.