Pay Attention to Me 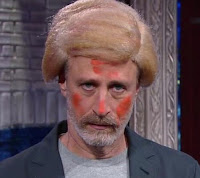 Yes, Dump signed his executive order start repealing the ACA. Make no mistake, it will take 50 senate votes to repeal the ACA. But for all those of you turds who think that Dumpacare will be any better? First - he has no plan, other than something, "much better!".  The devil is in the details, isn't it?

Yes folks, it is harder to replace healthcare than repeal it - so there is your reality. That "much better" plan may never come to fruition.

Indeed, it comes back to you in ways of increased premiums, of if you have an employer solution, you will be forced into a High Deductible Plan - and them deductibles are just gonna keep going up because your employer is gonna share that cost with.........wait for it.........................YOU!

You can thank Uncle Dump for that one.  ...and Tom Price, as he is one of the biggest detractors of the ACA.

And another note: it could cost up to $350 Billion (with a B) over the next decade to repeal the ACA. I thought the republicans were supposed to be fiscal conservatives. Then again, no cost is high enough to flip the proverbial finger to a black man who held the office.

Lots of risk for the environment (more on that in a bit) for little pay off in terms of jobs. Oh, and Dump own(ed?) stock in Energy Transfer Partners, the company that is building the Dakota Access pipeline.

A room full of men. Not one woman around as Dump signs (another) executive order on funding that goes overseas if pregnancy terminations are performed. Or something like that. He's dipping his foot in the water to see how it plays here................three days after a march with countless women. It's not a mistake. It's calculated.

the Dump administration has instructed officials at the Environmental Protection Agency to freeze its grants and contracts, a move that could affect everything from state-led climate research to localized efforts to improve air and water quality to environmental justice projects aimed at helping poor communities.

Yes, he's still won, and he's still going on about this. Oh, and there is zero evidence that any voter / illegal voting when on en mass.  But for argument sake, let's say it's true. Dump says 2.4 million illegals voted. Clinton won the popular vote by 2.9 million. Dumpy is still off by half a million - just like he was off by that same amount he claims showed to his inauguration. Even when he defends his win he can't win.


Oh oh oh oh - have you noticed, Dump is almost nowhere with out Pence?  He's at every executive order signing (and there are a lot of those - even for four days). But Mikey-boy is even sitting next to Dump at "church".

....and you wonder who is actually making the decisions in that house.

Song by: Grand Funk Railroad
Posted by Blobby at 12:07 AM

we are so fucked. IMPEACH NOW!

Actually the GOP has several 'alternatives', not none. The irony of them is they don't agree or gel with each other, and many of them have socialist undertones that will make conservatives howl. So They are more or less stymied and will either eat crow/keep the ACA or scrap it entirely, which should be the death knell for them. I am content with either outcome.