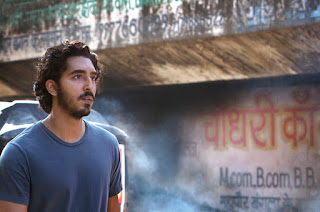 Lion is a story in two parts.

Based on a true story of a young boy, Saroo, who gets separated from his brother in a small town in India and ends up 1200 miles away - alone. This would be part one.

The following part is Saroo as an adult, brought to the remembrance of his childhood and the potential strife his family had endured - along with with the inevitable search.

For the most part, I enjoyed Dev Patel's performance of the adult Saroo. Yet it was the young Saroo that made the movie. He was able to convey the love of family, the fright of being lost, alone, hungry et al. Young Saroo is adaptive, resourceful, brave and inquisitive. That actor holds more weight  - and while at times uncomfortable to watch, also very engaging.

Patel's performance is much more restrained than in the Best Exotic Marigold Hotel, or even Newsroom. He could chew the scenery there.

The issue with the movie becomes the second half. One gets the need to know where one comes from in any circumstance, and more so in one like this. It's just the round-about of doing it seems underwhelming.

I finally figured out Rooney Mara has one acting style - and it's "boring". There seemed to be little connection to Patel's character. And Patel has way more lustrous and impressive hair than Mara.

I wanted more of a connection between Patel and his adoptive parents played by Nicole Kidman and David Wenham (whom I haven't seen since he played Faramir in the Lord of the Rings). The semi-connection that comes across is more from direction or script than it does from the actors abilities....except maybe Mara's.

Kidman gives a gives a great monologue in her big scene, but someone needs to tell the costume designers, just because the real woman Kidman portrays has crappy hair, doesn't mean the actress does too.

In the second half you get glimpses of what could have been better. In the first half, it is played nearly to perfection.

I'll give no spoilers.

Lion is a good movie, not always an easy one. I'm on the fence if it is Oscar worthy - which people are jabbering about. But nominations are not out, so we will see if it is eligible.


Song by: Vampire Weekend
Posted by Blobby at 12:02 AM

Sounds interesting enough to make the effort to see. Doesn't open here for a couple of weeks yet, but go I shall.

I'd like to have a fling with dev patel!