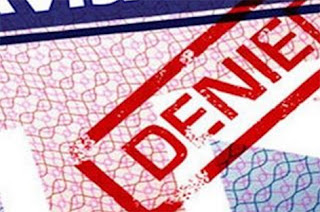 Of course, the ban on entry to the U.S. isn't on everyone - just Muslim countries. I don't know what percentage of a country of citizen who are Muslim apply to this ban, but 3.3 million or more are American. Not in America, but American.  Where should they go?

And if Dump is being truthful to you all - and I think we can all agree he wouldn't know the truth if it peed on his face - it is not all Muslim countries. Iran, Iraq, Libya, Somalia, Sudan, Syria and Yemen are the ones on the list.

Make no mistake, where U.S. businesses have lucrative interests are not:  UAE, Qatar, Saudi Arabia seem to be fine for entry.

We can pretend this is all terrorist related - but if that were true, Saudi Arabia, Egypt and Lebanon seem to be off this list. You know - the three countries from where all of the 19 terrorists from 9/11 originated.

If you're looking as ISIS origins - we are still not covering the bases:  where is Saudi Arabia (again), France, the UK, Morocco, Tunisia and Dump's motherland - Russia?  Oh yes, Russia has over four times as many ISIS fighters amongst them than Libya.

And those pesky green cards are off the table. Yes, the "executive order" bars green card holder entry into the U.S. if they are from those seven aforementioned counties.

And for all of you going "yayyy" to that, and say, 'because of him we won't have those terrorists' you also don't get other things.  I'd say you don't get the scientists who are doing incredible work here, but you none of you believe in science or facts, so, let's get you where it hurts........literally.

Under my employ, I have any number of physicians who are foreign born and trained. Incredible providers in specialties that some patients wait months to get into see.  One of my departments, I do not have one U.S. born physician. This ban could literally shut down an entire specialty in one of the largest medical organizations in Ohio.

On Friday, I had to issue a notice to all of them not to travel outside the country for the foreseeable future, as there is no guarantee of re-entry. They've literally been cut off from their families who are still living abroad. That is assuming these docs are not kicked out - even though legally here.

So, when you're ill and can't get into see a physician for your ailment, or can't get into the top rated one you want to see.........too fucking bad. Go see the nurse practitioner at the Minute Clinic.  Oh wait - you won't be able to.....since those positions need physician oversight.

I suppose the problems of those docs won't matter much anyway, if the ACA repeal happens.

I applaud mayors of Boston, Columbus and the likes. Still saying they will accept refugees - but all that is for nought since detaining at airports seems to be a thing now.

Still the underlying theme is scary. Balk all you want at the Nazi Germany comparisons, but starting to identify and target people of race and religion - and showing your papers. Then there is the controlling / limiting the press and relying on propaganda. It all seems like a pattern if you ask me.

I'm sure it is all coincidence but the White House had no mention of Jews on Holocaust Remembrance Day, but didn't because Dump "didn't want to offend the other people the Nazi's targeted and killed".

Had that been said in front a faux brick wall with a mic, there would have been a two drink minimum.

I'll give this to Dump - what took Hitler half a decade to do, he's done in nine days.

Song by: Tom Petty & the Heartbreakers
Posted by Blobby at 12:02 AM

it IS fucking scary...and only we the intelligent citizens know what is happening. WHY are our congresspeople not speaking up against dump?