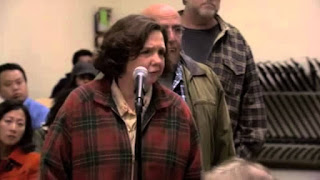 Ok, technically it wasn't a 'city forum' but a larger neighborhood one, as "they" are developing an area adjacent to our 'hood.

The plan is for stores, restaurants, upscale housing and possibly a boutique hotel.  oooooh.

Oh - and an 8 story parking garage.

Have you ever seen the show Parks & Recreation?  One of their hallmarks is their forums.  Usually there are a handful of folks you see forum to forum, but others are sprinkled in there too. It's crazy conversation, usually indicative of nothing relating to the topic at hand.

And as it turns out: spot on.

I'd say there were about 90 folks at this shindig. 710 and I - like always - skewed slightly to the younger part of the crowd. I mean, this was a Gold Bond / Centrum Silver crowd. I suppose this is what some people do to get out on a Tuesday evening.

Mind you, the presentation wasn't perfect. It wasn't even fully formulated, as it was somewhere between the pre-planning and planning phase.  The firm had won the RFP, but other than that, buildings were concepts.....occupants were non-existent and one beloved bakery doesn't seem willing to reacclimate with owners after they tear down the existing building.

It was not far into the presentation before the questions / comments started coming.

A woman, who is also a neighbor, had very strong opinions on how to select and architect and what the style should be: ultra modern.  She and her husband have a very contemporary house, but the business district is 1920s. I don't know modern would work there, but......I'm also open to ideas. Lorna was not. She wad adamant. And she did not seem to like the idea that they would entertain other styles.  ......not that they're even vetting architects as of yet.

The few people younger than us were dismayed there would not be a park / playground.  "How will you ever attract younger residents if you don't have a playground.......even if it is just two swings?"  It all reeked of Helen Lovejoy.

From there it went off the rails.

"When are they going to paint that rusty old bridge?  They painted one side......but the other is still untouched!".

Ok.  First......that bridge is about a mile from the development in question. It belongs to CSX. And it resides in another city. Oh - and these are business developers.

"Are you going to have dual traffic flow on Stokes?" (it's currently a 3 lane, one way street).  That street runs through two different cities - - and is even farther away from the aforementioned bridge.

It was fairly clear these two men didn't work for the city or any municipality. They're not city planners.

I bordered on amused and annoyed. I wanted to hear what these guys had to say about the development, but that got shut down as they tried to respectfully answer crazy ass questions that had nothing to do with anything. And of course, I was dying to hear what other nonsensical things would come out of the mouths of the crowd.

That said - we were moving in on the 90 minute mark with a slight end in sight and then to open it up to Q&A.  Ugh.  That could take forever, regardless of how entertaining it might be. It was now almost 22:30 and we still had not had dinner and it was boiling hot in the venue.

Still we laughed about how much it is like Parks & Rec.

I highly suggest, if you have the chance, go to one.

Email ThisBlogThis!Share to TwitterShare to FacebookShare to Pinterest
Labels: Neighborhood

Who's going to stop al qaeda???

Haven't started vetting architects?
She needs to get with the program. i mean who in their right mind these days would vet when one can tweet instead?

I went to a meeting in tiny Philo, Ohio regarding a bridge project. Biggest concern was not moving the bridge away from The Bar.