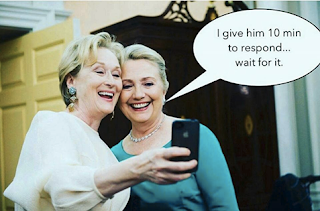 It's the moment of truth.

Ok......that happened Sunday. But you know, I needed to make sure Russia didn't hack into the system and change vote tallies. And that there was appropriate investigation and hearings into such matters.

I also have post-traumatic stress disorder from having to endure watching Jimmy Fallon for anything longer 1.882 seconds.  Not at a time.  I'm talking cumulative.

Though it has taken me a while to catch on, I'm realizing that Mike is "letting" me choose first, and then he makes his selections. How very convenient. One of us (cough cough me cough) does the heavy lifting, and then someone else comes up from the rear and makes mostly the same selections, save a few so, he can win, even if it's only by one.

It's somewhat brilliant when you think of it.

And it's somewhat sad.

That kid he sat next to in math class who was always crouching over his paper?  So Mike couldn't cheat off of it. Is it any wonder I had to go over the ballot again and again?

So here is what it came down to:


Of course, the cookie prize thing was overshadowed by the one and only Meryl Fucking Streep (you must scream it like Billy Eichner).

Mike and I chatted during the presentation - we are both quick wits if I say so myself. So it was a fun back and forth most of the night, still at 21:23 I knew I was mathematically eliminated, so I knew I could go to bed at a reasonable hour.  ......then there was the introduction of Meryl.

Usually she is quippy and sardonic, which is why she'd be my selection of the one person with whom I'd like to have dinner. Last night she was really neither. But she was spot on.

And she also ruined my run of trying not to mention Dump.  Save a very brief pseudo-reference to him on January 1, you have to go back to December 23rd since I've truly brought him up - - kind of like a hairball.

The beauty of her speech - she never uttered his name.

That and she brought note several note cards up on stage, looked at the top one for about 2.6 seconds and never referenced them again. And no one, I mean no one, plays off Meryl Fucking Streep. 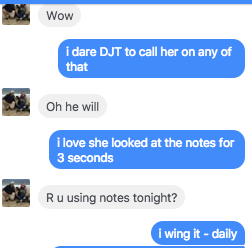 Then there's the whole, 'Hollywood has no place weighing in on politics'. or 'what do actors know about politics'.

What does a reality tv star know about politics?   It's rhetorical folks.

I get that Ryan Gosling, as handsome as he be, might not have a say, since he's Canadian and all, but why is an actor different than a steelworker when it comes to having opinions?  They both use many of the same services, such as utilities, roadways, etc. They both pay taxes, unlike you know who.

Yes, actors have more of a platform from which to speak. But so did Dump - and his supporters didn't seem to mind that. Hell, they even elected him.


That fucking drunken / drugged out mess. She couldn't read. She could barely stand. And she couldn't even see the microphone stand. Amy Schumer showed that she is a real actress, as she didn't let on how mortified she was.  ....and she didn't laugh.

Yet, with Meryl Streep's speech, everyone forgot about that entire incident. Hell, they forgot who won best picture.

Still.....with the distractions and all, when it comes down to it, I need to get a set of cookies to Boston. I'll try to time it with Mike's birthday and make it a two-fer.

Because that's the kind of great guy I am.

I love the pix! MFS was spot on!

and as usual the dumplings were tweeting "bad, very bad".

Aw, c'mon Blobby, it was (mostly) a skit (I do believe Goldie didn't know she was hogging the microphone). It was all to promote their new movie, "Snatched". Do you really think Goldie thought she was presenting for Best "Mystical" (vs Musical) or that the nominees were the most "tainted" (vs talented)?

But you are right that this was the best part of the show. When the camera shoots over the audience as Ryan Gosling approaches the stage, Ryan Reynolds and Andrew Garfield are seen giving each other a big kiss!

One of our friends has started calling him "Twitler"