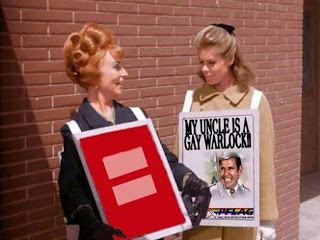 Being a gay blogger - actually, a blogger who happens to be gay - I am contractually obligated to write about the Supreme Court's decisions on DOMA and Prop 8.  It's in the by-laws people!

I will fully admit to being on the SCOTUSblog at 10:00 sharp for the past few weeks, every day there was possibility of a ruling, alas, none came until yesterday.

With it being the last decision day until the new session starts, I figured it might not be good news and after the rulings were made public that the justices would beat a path out of town - except for Thomas, who seems to lazy to do much of anything, or Scalia who'd stick around to possibly gloat.

While I was hopeful, I did brace myself for the worst.

Then came the DOMA ruling.

It is hard to explain, but I have a feeling many felt the same thing:  vacations, xmas, birthdays, reunions all rolled into one.  A certain light at the end of a very dark tunnel.

Yes, gay rights have been making great strides for the last 10 years, but that SCOTUS took on the case, one the GOP and Boehner kept funneling millions of taxpayer dollars (what - there's a debt ceiling?  what - there's a fiscal cliff?) to defend, was a hard-earned and, in my opinion, a well-deserved victory for gay couples everywhere.

Granted, currently this means nothing to me personally, and I'm trying not to let that dampen that we've cleared a huge hurdle in what has been and will be a long race (ooooh.....a sports metaphor.  Sorry to you non-sports homos).

While married to 710, through the District of Columbia, we do not reside there, or in any state where marriage is legal.  Federal rights regarding marriage will only be recognized in states that have gay marriage, not even in states that recognize gay marriage (of which I don't think anymore exist, since even those have now allow same-sex unions).

Ohio has neither. So right now, we're just kind of status quo.

Depending on which group is advocating Marriage Equality in Ohio, it might be on the ballot in 2014 or 2016 - which means a 2015-2017 enacted date, assuming it passes.

Still, I feel like I'm walking on air a little bit.

The decision on Prop 8, at least in theory, sounds promising.  The wording of the decision seems to be fraught with a loophole or two saying it wasn't properly before the court.  I'm not a lawyer, so I don't know if that leaves anything open to appeal, but as of now, re-opening marriage in California seems to be a go.

As much jubilation as is out there from our side, lordy, the hate that is being spewed by NOM, FRC, Congress (!) is just revolting and demoralizing, even on this day.

Don't get me wrong, we all knew it would happen - and their words aren't really all that different than every single campaign they've done to rally against each state trying to pass same-sex marriage.  I think it's just the volume that has all come at once.

I have to stop reading their hate, because that is really all it is:  hate.

There is no logic to their argument - and I am trying to look at it objectively, but either I can't, or they have no leg to stand on.  I'm opting for the latter.

If Mike Huckabee can provide proof Jesus wept when the rulings came down - then do it or shut the fuck up.  Nancy Pelosi - thank you for your response to Michele Bachmann.  Besides being a nut job, Bachmann will be gone in 2014 and well, she's been quite ineffective in most everything she does.

Still, the folks bringing out the bible just have to quit what is defined as traditional marriage.  Is it the slave women that the men slept with?  Is it the multiple wives?  Is it Adam and Eve's children committing incest - I mean, because if it were only Adam and Eve, where did everyone else come from?

But when you talk from hate, you don't / can't / won't see that love is love.

It could be environmental, but all of my gay couple friends have been together for over a decade, some more than that.  Not some of them - all of them.  To the GOP, the religious nuts and the wingnuts - this isn't a fluke and it's not going away.

Yes, NOM is now (again) saying there will be a constitutional ban on same-sex marriage.  Of course, they also put out a press release two days ago saying that SCOTUS will rule in favor of opposite-sex marriage........so.............they got that one wrong.  But in almost every (or is it every?) state they've fought against same-sex marriage, they've lost.

I'm not sure what their end-game is here. Is it just to pound a chest?  Is it ego?  Is it just a way to spend millions of dollars that you now don't have anything to show for it?   Somewhere, the economy thanks you.

The court breakdown on DOMA doesn't really surprise me. I mean, in the past 14 years, how many rulings have not been 5-4.  Normally I would think it would have less to do with the law than politics, but the difference in for / against was surprising to me.   Yes, Alito, Thomas are usual and constant suspects for cases like these.  But one expects Scalia too.

Prop 8 wow'd me (well, as much as I can be 'wow'd') with Sotomayor and Kennedy dissenting.  DOMA went with Roberts and Scalia joining Thomas and Alito.

Still, it was a big day.  There will be more fall-out, good and bad. I'd say there'd be more debates, but that is a formalized kind of event - so it will be screaming hate-speech.  And don't kid, it comes from both sides.

But fuck if these rulings didn't come so close to Cleveland Pride.  Now I feel I'll have to make an appearance - not that anyone was waiting for me to do so.  I had planned to skip for other reasons, but, this is a historic event.   Bother!

Song by: Joni Mitchell
Posted by Blobby at 12:08 AM

PA is so steeped in h8; I never expect to see same-sex marriage allowed here.

but I AM SO HAPPY FOR ALL MY BOYFRIENDS! all the h8ers can STFU!

LOVE the leading photo too. I had to stop and look twice before I got it.

that was lovely prose. thank you for sharing it.